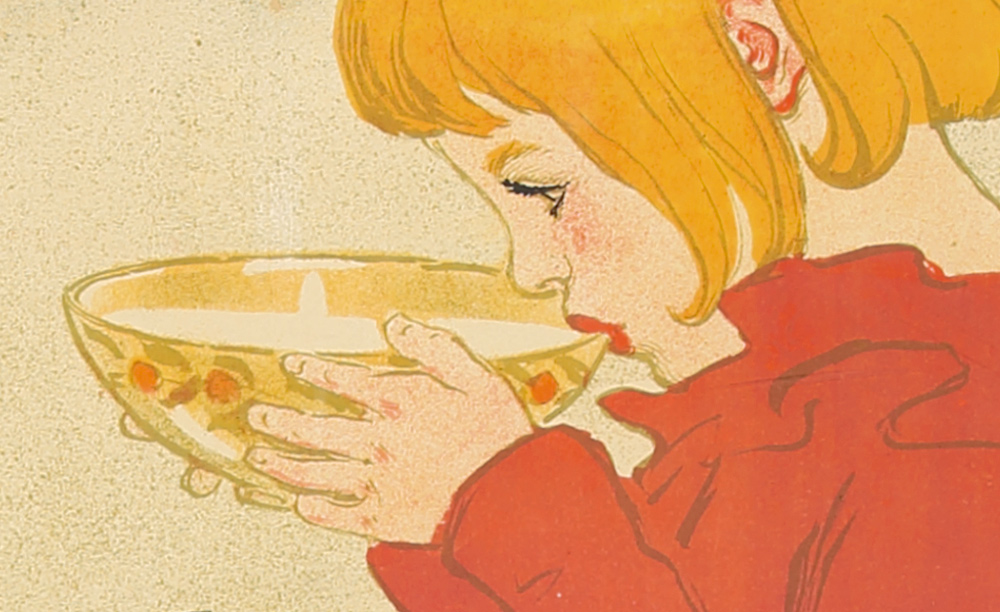 Have a second helping of first rate vintage posters – the world-famous, and those that ought to be – all on auction Sunday, March 12.

Julius Klinger’s sharp-edged, architecturally-minded designs, with their stark contrasts of red and black, make his work instantly recognizable. His skills as an advertising strategist play out here, in an ad for his own lecture on the subject of “Reklameprobleme” – literally, “Advertising Problems.” It was a clever way for Klinger “to promote his own brand identity: the poster included some of his most notable trademark creations in a tightly balanced tower of logos.”

Klinger, born in Dornbach near Vienna, was of Jewish descent; his last poster was for the Jewish-owned Ankerbrote-Werk factory in 1937; the factory was transferred to “Aryan” owners in 1938. On June 2, 1942 the Nazis deported Klinger to Minsk and he was killed there or en route.

In a lithographic tour de force, Livemont creates a lush riot of ornamentation – from the marquee archway, to the floral wallpaper and lilies at lower left, to the fabulous adornment of the model’s flame-haired tresses – all contrasting with the rigidity of control in the corset and in the vertical spine of crowns to the left. As a visual metaphor for the fine intricacy involved in corset construction, it’s never been surpassed.

During World War II, France’s Vichy regime banned all liquor advertising, which throttled Loupot’s income; so he repaired to his home in Chevroches and practiced painting. This signed oil painting, whimsical on its face, is far more deeply colored and evocative than any mere maquette should be. But a Gondolo Biscuit is no mere cookie.

Founded in 1843, the Gondolo brand was a household name in France, a beloved morsel of childhood, tradition and memory comparable to Proust’s madeleine. In this work we may perceive a profound nostalgia for the France of Loupot’s youth, anxiety over staying afloat (both literally and financially), and hope from abroad – note the dollar-sign shape. But that’s not all.

In 1962, Gondolo’s fortunes began to sink. Eventually, they sold out to Nabisco, which allowed the business to fail in 1975, making Gondolo a symbol of dying French culture and commerce. But then, something wonderful happened: in 2013, a Frenchman found Gondolo-branded items in an old shipping trunk of his grandmother’s. Luckily, he had co-founded Neway Partners brand design agency. What began as a pet project to reinvent the brand identity culminated, in 2015, with the acquisition of a top pastry chef to resurrect a line of Gondolo products. Now this high-end, artisanal product is sold in boutique shops in France, with plans for export.

It’s the backwards grinning glance, isn’t it? That little gleam in the elephant’s eye that signifies, “This is clever. Remember.” This is one of Mauzan’s most famous designs, and it’s legendary because of its sheer improbability: why would a pachyderm need a poncho? The black of the night, and the needlepoints of the rain, create misery. The elephant’s savvy glance, and the sun-yellow of his tarp, bring us back to joy. We identify with the animal, not its miserable rider. One of the masterpieces of this art form.

You’re not looking at the Gold Star. You’re looking at the flame-driven moth-nymph, whom Pal has drawn with “every curve and flesh tone” delivering “a sensuality much too solid for make-believe” (Gold, p. 17). She’s illuminated by the golden light of kerosene. But this domestic lighting technology, in use since 1850, was on its way out, to be replaced by acetylene and electricity in the next decade. So Pal’s work here is genius: “The last word in lighting” is both literally and figuratively true; the antiquated technology is sold with romance and eroticism.

The Bataclan, in its beautiful and eye-popping Chinoiserie styling, has been one of Paris’s most beloved venues since it opened in 1864. Originally designed for café-concerts, it was a cinema from 1926 to 1969, then became one of Paris’s favorite rock music venues, hosting some of the greatest mainstream, left-of-center and underground acts of all time, from The Police to David Byrne, The Ramones, and the Velvet Underground. So central to Paris’s cultural life is the Bataclan, after the terrorist attacks of 2015, when most sites of such tragedy are torn down, the Bataclan renovated and reopened in November 2016. This historic poster for “J’te Veux!”, or “I Want You!” (a three-act comedic opera of 1923), transcends its era and fully becomes part of ours – a tribute across the decades that music, and the community of The Bataclan, is there for delight, love, desire, resilience, and life itself.

All the warmth, humanity, and affection for which Steinlen is so loved comes through gloriously in this poster for the newly-marketed “lait stérilisé” that was touted over the “lait ordinaire” at that time. Charles Knowles Bolton, writing a year after its publication, proclaimed that this “is perhaps, the most attractive poster ever made. No man with half a heart could fail to fall in love with the child.” Louis Rhead himself commented: “When I saw it in Paris last year…it seemed to me the best and brightest form of advertising that had appeared.”

Some of the world’s top restaurateurs, Danny Mayer and Thomas Keller among them, have instituted no-tipping policies in their Michelin-starred restaurants. Azerbaijani Leninists were ahead of them, by nearly 100 years. This fascinating piece of propaganda tries to convince waitstaff to reject tipping voluntarily, by casting the practice as a perpetuation of hierarchies.

Up top, we see the waiter servile before the outstretched cash; below, the waiter rejects the money as an affront to dignity. Notably, the first three figures are illustrated in Modernist forms; the figure at lower right is the largest in the composition, rising to the full measure of Socialist Realism.

Cappiello is one of the greats in the history of advertising art, and we have over 40 of his best works in this auction. This, however, is not a poster – but a one-of-a-kind maquette, a study for an ad that didn’t quite make it.

A giant, overlord-like red face with a wicked scowl-smile looms over a woman, who, big bottle of cider in hand, cheerfully dismisses the patriarchal threat. This delightfully over-the-top study was accomplished in gouache & crayon. It arrives from the archives of Cappiello’s longtime printer, Devambez, and comes with the stamp of the Atelier Cappiello on verso. One of a kind.

Andre Éduard Marty was a Parisian Art Deco artist who illustrated Vogue covers in the 1920s and designed stage sets in the ’30s. He also accomplished dozens of posters for the London Underground. We have four small Underground posters from him, and each one is a miniature masterpiece of subtle cues and messages.

Here, a mother-&-daughter pair watch in awe as Royal Air Force biplanes approach in great waves, covering the sky. Mother is in a gossamer Art Deco dress, as fine as the silk of an airman’s parachute; daughter waves at the pilots. The phalanx of biplanes probably includes the 1933 Gloster Gauntlet, the last open-cockpit biplane the R.A.F. would ever fly. Four months after this air show, Winston Churchill would declare that Germany is rapidly re-arming itself. The beauty and majesty of flight, the fragility of human life, the memory of the previous war and the foreshadowing of the next are all held poignantly in this one small but superb work of art.

Jean d’Ylen is second only to Cappiello in his ability to create artful characters who burst out of their lithographs like fireworks of exuberance.

Case in point: like magic, a formerly convalescent pensioner dances out of his wheelchair after a brief stay at Plombières-les-Bains. The hot springs resort town was known for its healing waters, specializing in curing rheumatism and gut ailments since Roman times.

Top Posters with Reserves Under $1,500