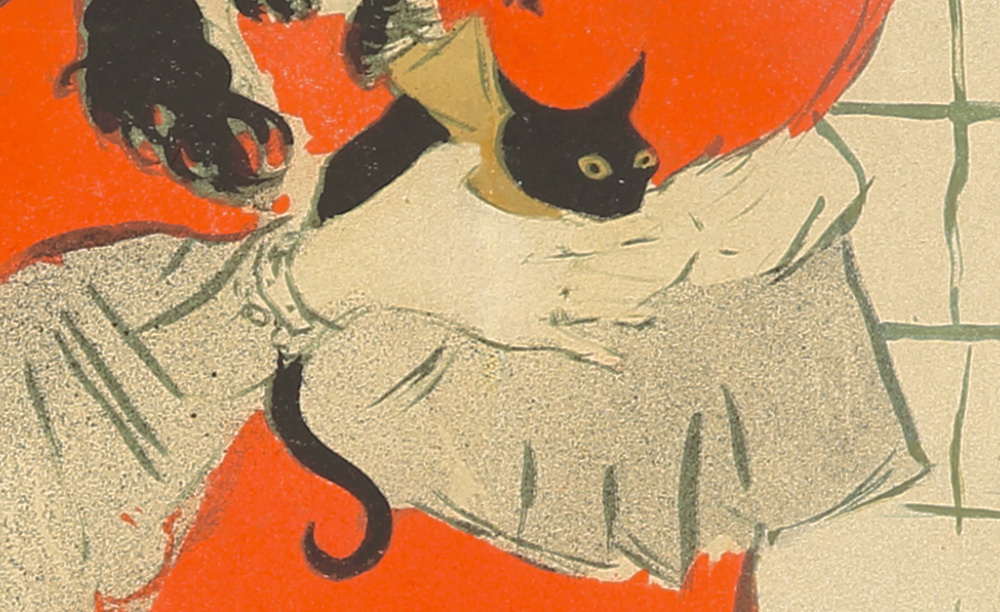 “Dogs and cats, living together!” – Ghostbusters

This swank kitty-cat is just the epitome of mid-century Modern design. Brun made two versions of this poster: one, minimal, with an off-white background; and this one, which is even wittier: the original as a poster on the wall, with a cat passing by suddenly attracted to the errant tail of yarn. With colors and attitude straight out of a Merrie Melodies Saturday-morning cartoon, this is one to treasure.

Dog-lovers rejoice! This affectionate terrier, leaning on the lovely lady with parasol and Sunday-strolling dress, wishes very much that you’d walk him to this splendid exhibition at the Tuileries – a dog show, plus a gallery of paintings of dogs on the hunt. It’s being put on by the Central Society for the Improvement of Dog Breeds. Doigneau, a professional painter of country scenes, produced (what may very well be) his only poster in exactly three colors: black, mustard-brown and yellow, a remarkable economy of pigments.

A longtime mascot for Fein-Kaller, a maker of men’s and boys’ ready-to-wear clothes, this pup proves that any old dog with new duds can turn new tricks. (Indeed, Carigiet had drawn the same pup right-side up in 1936.) Sadly, the Swiss company, founded in 1895, closed in 2011.

My, is it windy out there! G.K. Benda may well have taken a page from L. Frank Baum’s The Wizard of Oz, as he depicts Mistinguett fetchingly pulling a Toto-esque purse pup back from the whipping winds. Over her 50-year career in French song, dance, and cabaret, Mistinguett was known both for her coquettish whimsy and for her flamboyant costumes, which we see here: a red chrysanthemum-like butterfly at the end of her hat, extending from caterpillar-like stripes; ivy on her shoe-buckles; the candy-cane-like line of the dog leash… This costume is perfect for both December and March holidays.

“May Belfort, whom [Lautrec] represented in at least ten works, had gained a reputation for corrupt innocence by appearing onstage dressed as a baby holding a black kitten in her arms, and ‘miaowing or bleating’ her popular song, “Daddy Wouldn’t Buy Me a Bow-Wow,” whose lines had a double meaning which was not lost on the French-speaking audience: ‘I’ve got a pussycat, I’m very fond of that’” (Frey, p. 382). This would have been particularly amusing for the audience, as Belfort was in an openly lesbian affair with the English dancer May Milton (see PAI-LXVII, 526).