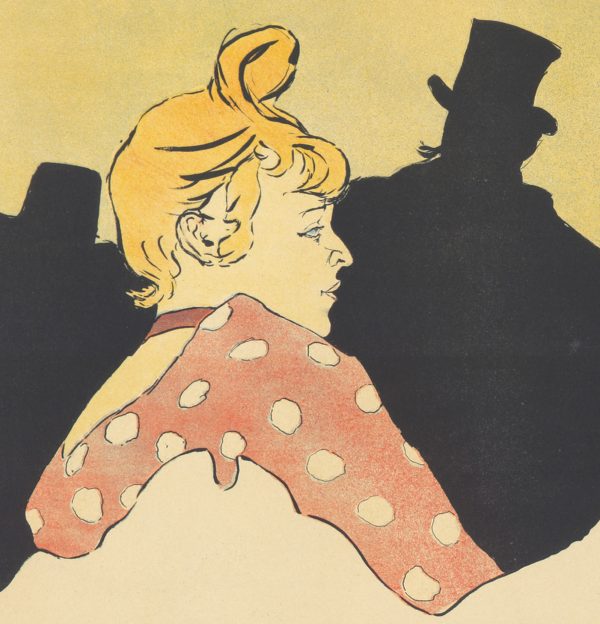 CAN AN OBJECT be too famous? The Mona Lisa comes to mind, but I think we can class Toulouse-Lautrec’s Moulin Rouge / La Goulue (1891) as another contender, if we entertain the question. It’s easily one of the most well-known images in the world. But as we know today, in our media environment, “fatal fame” – in the words of The Smiths – “can play hideous tricks on the brain.” Lautrec’s masterpiece has become hollowed out in our consciousness, a kind of shorthand for a brand named Moulin Rouge and a branded entertainment district called Montmartre, things we understand if at all through a Baz Luhrmann movie.

It’s a problem of our digital environment.
We see the world in thumbnails.

That’s why Lautrec’s La Goulue is so remarkable in the original, as an object, a spectacularly large lithographic expanse more than 5-1/2 feet high (in the two-sheet version) and over a yard wide. You are sucked into its raucous environment: precisely what Baz Luhrmann was trying to achieve in such over-the-top fashion, a century later, with the use of 3D. It’s especially interesting since, as art historians have noticed, it is such a flat composition. What are those three random globes to the left? ––we do not ask, we just know them to be the hazed glare of gaslights seen through an absinthe all-nighter; absinthe-green being the color of both floor and ceiling in this image.

In 1880s Paris, the urban vista in certain districts was Times-Square-esque –– except, instead of fifty-foot tall megapixel LEDs, you were gobsmacked and tweaked visually by dozens of posters, hungry for your eyeball attention. (La plus change, la méme chose:  today, digital marketers are similarly ravenous for monetizable half-moment.)

This is the environment into which the miniature, dirty-minded aristocratic scion Toulouse-Lautrec entered, after several years perfecting his technique as an oil painter. In 1891 the 27-year-old got his first commission for a commercial work –– his first-ever lithograph ––this one. And he knocked it out of the park. Broke the mold. He fundamentally changed the possibilities of advertising with this one image by injecting it with sex-comic realism.

Of course it was a sensation when it arrived, dwarfing every other advertisement around it. People were both shocked and completely captivated: sucked in, yet put-off: reaching into the very basics of illicit desire: and nailing the raison d’étre for the Moulin-Rouge itself – a place for Europe’s wealthy to be fashionably risqué at the red-hot center of Paris’s hardscrabble, hard-drinking artists’ colony. (Brooklyn’s Williamsburg neighborhood took lessons.)

The Cast of Characters

Our star for the night’s entertainment, La Goulue, the glutton, was Louise Weber. She was the Moulin Rouge’s star can-can dancer, occasional prostitute, a scandal – as many of our art histories will precis. What she’s rarely called is a sexual revolutionary – one of the first celebrities in a matrilineal line that extends to Madonna, Peaches, Missy Elliott, Miley Cyrus and Nikki Minaj among others: an articulation of owned sexuality, fierce competitiveness and take-no-crap attitude. In other words, if women were to be sexualized objects, well then: play it to the hilt. Montmartre had a high-kicking contest for the can-can girls. La Goulue won it by kicking the top-hat off the head of a former lover, who was a wealthy financier. Then she’d repeat that high-kicking for others, while forgetting to wear panties. If you were the object of her ‘affection’ at those moments, you probably had to look her in the eye: or get a heel in your face.

The shadowy figure in the foreground? Not an elderly lecher, as you might think; it’s actually the equally mysterious Jacques Renaudin, who went by the nickname Valentin le désossé, or Valentin ‘the boneless.’ This ludicrous nom de danser apparently referred to the elasticity of his limbs while dancing, creating a spectacle of elegant contortionism with great beauty. He occupied the nebulous space collapsing performer and spectator that was the Moulin-Rouge’s specialty. He was a fixture of the scene, an amplifier of the party, and a legend for never accepting payment of any form – a particular oddity considering the thick atmosphere of carnality all around him.

A Many-Layered Dirty Joke
Lautrec arranged his composition so that your eye would zero in on the white expanse of La Goulue’s bloomers, and ogle her crotch. Here, alone, he created a double-entendre couched in a revolutionary technique: there is no ink upon the virgin paper – it is naked of all adornment, even as La Goulue both exposes and defends herself in her cancan kick.

If we look to the perspective-center, however, we see it’s formed by the angles of the silhouetted crowd, and the floorboard slats, converging upon upon Valentin’s hand. Is he ‘copping a feel,’ deserving the kick to the nose that he’s receiving? Or is he gesturing “whoa, stop, too much”? The phallic position of his left hand, rigid by his pelvis, suggests that even ‘the boneless’ is aroused by La Goulue’s lurid spectacle. (And T-L himself, as his signature suggests in its proximity.) “Too Much? Or Not Enough?” William Blake asks in his Proverbs of Hell (1789), and to this Lautrec answers with the blasé terror of Marlowe’s Mephistopheles: “Why this is Hell, nor am I out of it.”

As Mary Weaver Chapin mentions in Toulouse-Lautrec & the Culture of Celebrity, Valentin “becomes both an obstacle to the viewer’s access to La Goulue as well as a stand-in for the onlooker straining to look up her skirts.” In other words, he’s both a surrogate and a cock-block – precisely the role he occupied at the Moulin-Rouge in real life. In order to kick the cancan with La Goulue, you’d have to go through him first – the impossibly agile gentleman dancing-fiend of the world’s most celebrated party.

That’s when it’s valuable to take another look at Toulouse-Lautrec’s masterpiece, and have it deliver its satori – literally, ‘a kick to the head.’