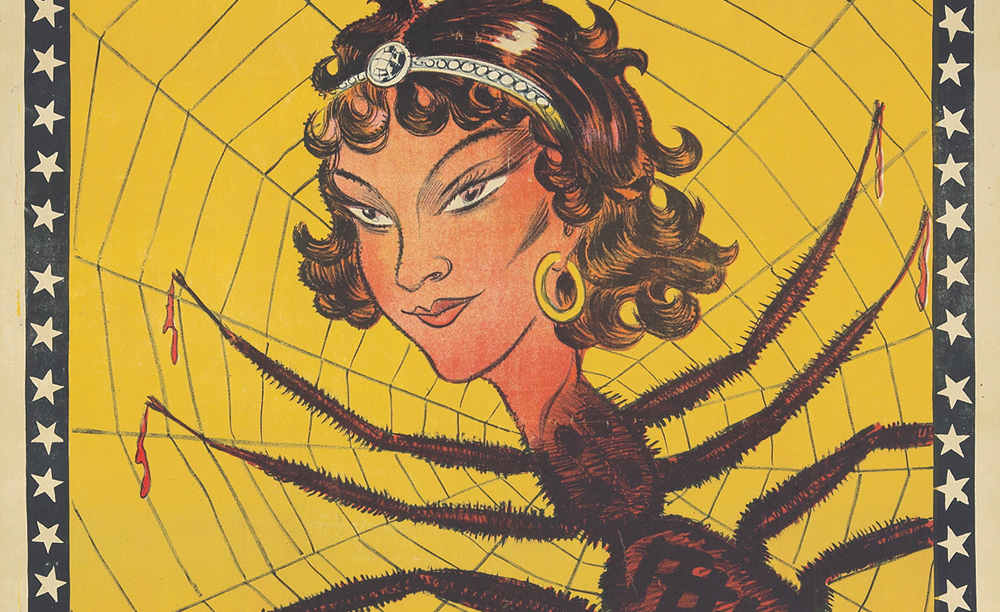 When the going gets weird, the weird turn pro.

This is not an acid flashback: that’s a dog named Miss Dublin, looking quite fetching in her gown of many pastel colors. She’s the star of the show; behind her (not pictured) is that pack of dancing hounds from Dog Dancing College under the tutelage of Professor Richard. The studio of Cândido Aragonez de Faria, a well-known posterist, is credited, and Faria himself may have been the designer.

Happy New Year, Deadheads! 1968 is coming to its end. What rough beast comes to 1969 to be born? A gaunt babe cracks open the shell of a skull, amid the floral wreaths, breasts, and outstretched grotesques of Conklin’s phantasmagoric composition, lightly adapted from the Renaissance painter della Robia. The messages embedded within this psychedelic New Year’s kiss – the Quick, the Dead, Santana, It’s a Beautiful Day, and the Brotherhood of Light in this Winterland wonder – are marvelous. “Includes breakfast,” says the poster.

A world classic of Americana: “East-Side, West-Side, all around the town. / Tots play Ring-a-rosy, London bridge is falling down / Boys and girls together, me, and Mamie Rorke / Trip the light fantastic on The Sidewalks of New York.”

Written by Lawlor and Blake in 1894, the popular song “The Sidewalks of New York” was one of the great, famous theme songs of the Big Apple for an entire century – covered by Duke Ellington, Mel Tormé and the Grateful Dead among others. Max Fleischer, of “Betty Boop” fame, made a cartoon from the song in 1925; it’s in a 1934 Shirley Temple film; and followed the post-parade at the Belmont Stakes until 1996. It’s the source for our phrase, “tripping the light fantastic,” and though we never stepped out with a grizzly-bear and a cowboy in Little Italy, you’d better believe we’re catching a 6 Train there right now.

For the further intrigued, enjoy this documentary on the creation of the song and the environment of 1890s New York City:

Who was the Spider Lady? No one really knows when this poster was created – some say 1915, others suggest ‘1920s,’ still others insist 1937. Likewise, no one knows when the first Spider Lady attraction appeared at a circus sideshow. But “Spidora,” as she was known on the Coney Island and Atlantic City boardwalks, was indeed a creature with a woman’s face, smiling out from spiderlegs and web on the wall – a trick of mirrors and geometry. A very special remnant of carny culture, this time with a French accent.

One of Italy’s signature beverages, Cinzano has been in production since the 1700s. Its ads have always been at the forefront of innovation – in 1912, it was the first product ever advertised with a neon sign in Paris. Here, they’ve acquired the talents of Carlu to create a rather bizarre but eye-catching centaur-cum-jockey to promote the beverage. As the text reads, even for the most unusual of creatures, Cinzano is “always the favorite.” This Lot comes with a miniature, signed crayon drawing of the large poster’s design.

Now that’s a lot of baggage. This absurd figure – from the Napoleon hat on his crown to the monkey on his French horn, down to the fork in his shoe – is the unlikely hero of Le Schpountz (“Heartbeat”), a 1938 French comedic film advertised here for a 1952 revival courtesy a society dedicated to the films of director Marcel Pagnol. Never shown outside France, the film is a raucous send-up of the French film industry, with enough in-jokes to slay insiders and perplex outsiders. It stars Fernandel as a bored shopkeeper who becomes mesmerized by a film crew working nearby. The film crew decides to have a little fun, and proclaims him as a born actor, destined to become a star playing the great tragic roles of theatrical history. Immediately, the shopkeeper dashes off to Paris – and through bumbling attempts to break into stardom, instead finds unwitting success as a slapstick comedian.

All Disney-eyed and felicitously kicking, this punk zebra (note the mohawk) is a master of illusion. Look! You’re told he’s a zebra but the color of his stripes confirm: orange is the new black. The product tube is similarly confusing: is this zebra now a tiger? Zebraline is a sort of black shoe-polish, but for cast-iron stoves, giving your appliances the illusion of being sparkling and brand-new. Undated, but rare, and quite clever to boot.

Two sheets of terrific: a Roman charioteer pilots three rampaging lions through the Nouveau Cirque, a Paris institution for 40 years from 1886 to 1926, owned by the co-founder of the Moulin Rouge. This was an upscale establishment: lit entirely by electric lights; formal wear was mandatory. This poster has a place in the Musée Carnavalet, Paris; evidently, the Nouveau Cirque’s specialty was lions, as many posters of the venue feature the big cats. None, however, are quite as ancien regime as this masterpiece. Levy, who was mainly a printer, often designed his own posters as well.

Tenjo Sajiki, an independent, underground theater group founded in 1967, commissioned this poster from Yokoo for the second year of its avant-garde production “The Crime of Fatso Oyama.” It’s an “enlarged version of an oiri-bukuro,the envelope that contains the bonus actors receive when a play is a hit. The white shapes that dominate the poster are bloated versions of the characters for oiri, which means ‘overflow crowd.’ The inset in the lower right corner mimics the patriotic motifs and imagery used frequently in Japanese posters around the turn of the century. Tenjo Sajiki originally conceived of itself as a ‘freak show,’ and…The Crime of Fatso Oyama accomplished its purposes by using obese actresses and body builders in the nude and seminude” (Angura: Posters of the Japanese Avant-Garde, by David Goodman). Above the words and between the words “Jun Rope” are the words “Designed by Young Men For Young Men,” “La Mode,” and “Ginza West 5-1”. This is an early, rare silk-screen poster.

What is this strange magnificence? How does a Dutch poster from 1898 look like a still from a Japanese sci-fi anime depicting fashions in the year 2739? It turns out that Nieuwenkamp – in addition to his talents as a painter, draftsman, sculptor, etcher, lithographer, and designer of book covers – was also a writer, architect, explorer, ethnologist and collector of East Asian art. He was the first European artist to visit Bali. During the period of this poster, he was sailing to Java. This lithograph, advertising a home magazine (“fireplace” or “hearth”), features darkened Dutch canal houses (in the center of the frame) rising up to Gothic splendor at the top.

A whimsical work of art depicts the inimitable clown prince of the 19th- and 20th-century English stage, George Robey, loved throughout the U.K. as the “Prime Minister of Mirth.”

Robey was such a household name, Ezra Pound namechecked him in a letter to James Joyce, critiquing the “Calypso” episode of Ulysses thus: “Leave the stool to Geo. Robey. He has been doing ‘down where the asparagus grows’ for some time.”) Robey’s face, as illustrated by T.E. Stephens, is a perfect true-to-life caricature; and even the grain on the wood of the easel is detailed to perfection.

Here are some delightful & amusing comedic songs from the President of the Society of Mirth himself: