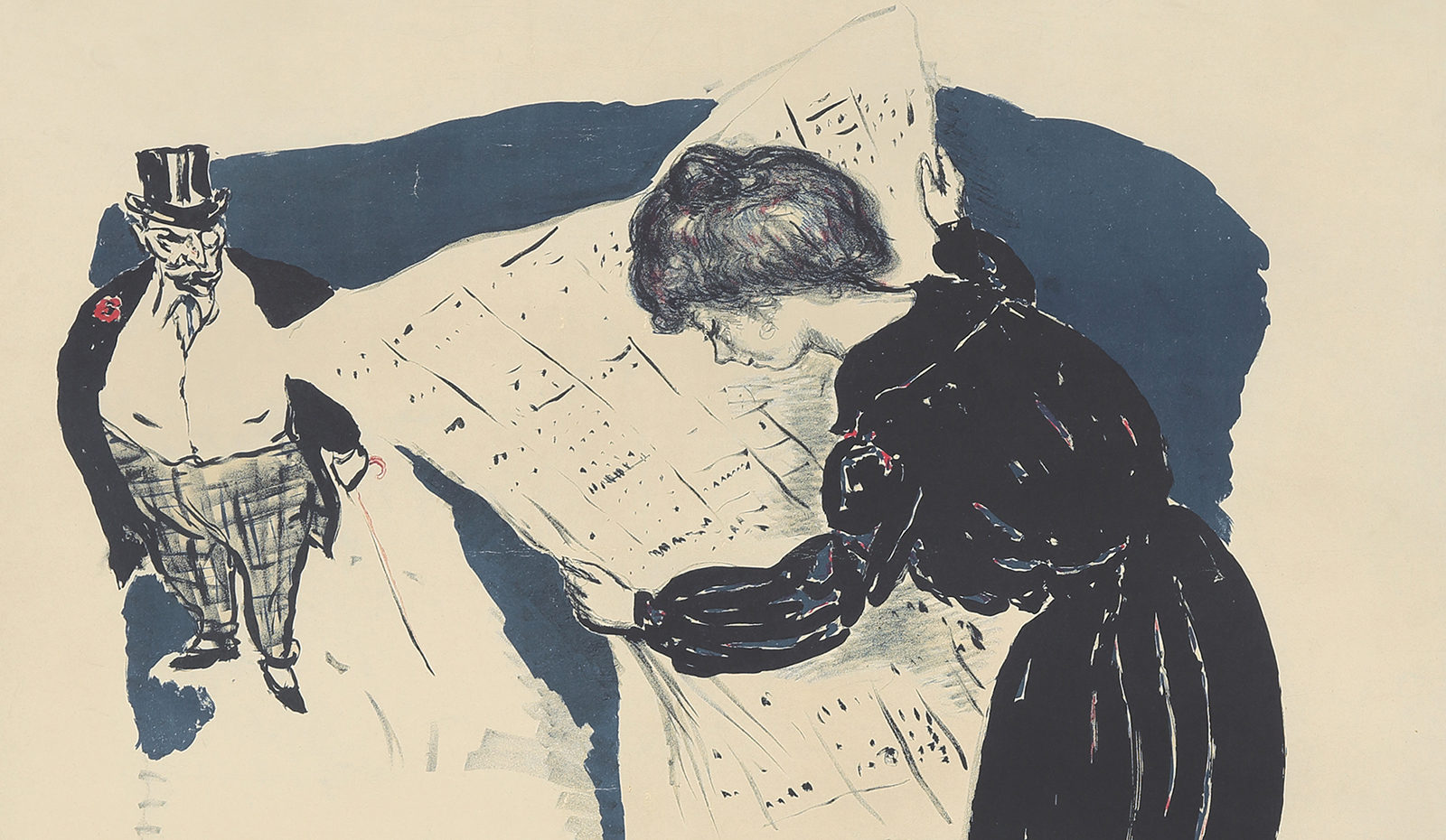 Before the digital takeover, print was king, and it flourished in newspapers, magazines, and journals. Marketing and advertising these publications also relied on the printed medium, and lithographs were just the ticket—printed in multiples and hung throughout the city, they provided ample visibility and influence on consumers. In advance of our 80th Rare Posters Auction, we took a deeper look at posters designed specifically to promote daily, weekly, and monthly periodicals.

Bonnard’s best-known and most enigmatic poster advertises the monthly La Revue Blanche, published by his close friends the Natansons. The significance of this image eludes us today and seems not to have been all that clear when published. Maindron admitted that he could not understand it, but found that “nonetheless it’s quite curious.” Bouvet attempts an analysis: “The strange form [at right] apparently following the young woman, is in fact a man, seen from behind, an opera hat on his head and coat collar turned up, reading the poster for the Revue on the wall” (p. 30). The design itself is quite ahead of its time, creating a geometric pattern out of other posters for the publication, while simultaneously contrasting the sassy pose and voluptuous costume of the female reader against the grisly nature of the street urchin-cum-newsie to her right.

Although it appeared for only two years during the heyday of postermania (March 1897 to December 1899), this magazine exercised a major influence on poster designers and collectors alike. Bonnard’s poster was featured on the first page of the first issue, and it was seen as a declaration of intentions on the part of the posterists: we see the older woman—representing the Print—look with curiosity at the brash kid with her portfolio—representing the up-and-coming Poster—obviously ready to take over as the collectible of choice.

Two of Bonnard’s ten posters were for Le Figaro; this second one is a study of a minor domestic frustration that masks a far bigger inequity. The young madame is engrossed within the pages of “the most important newspaper in Paris,” while the wealthy monsieur is consternated: he hasn’t had a chance to read it first. But this clever scene of domestic rebellion requires further investigation. Secondary education for girls was only guaranteed in 1880; the first French women’s suffrage association didn’t form until 1909, and French women were only granted the vote in 1945. Further, Le Figaro has always been a stridently right-leaning, traditionalist, conservative newspaper—and traditionalists weren’t fond of women’s education. With this historical perspective, it’s revealed that Bonnard’s design was actually quite risky—and pertinent.

Emphasizing the fact that the newspaper La Montagne is “written for everyone, read by everyone,” three patriotic figures from different walks of life are shown perusing its pages. A perfectly direct and informative image.

The stern old woman looks like she should not be messed with—but the young lady in green tilts her hat with a friendly nod, Lippincott’s in hand. It’s a savvy way to appeal to the younger demographic and position the magazine as a signifier of the cool and intellectual leisure class.

Flight is considered to be Kauffer’s most significant work. It is also his chief contribution to the Vorticist movement, marks the first issue of the Daily Herald, and represents the hopes and ambitions in the postwar “Reconstruction” period. The first version of this design appeared in Colour magazine in 1917, where it accompanied a call for design submissions. In 1918, Kauffer adapted the design for a poster that was sold to an advertiser for 50 dollars, who then resold the poster to Francis Meynell, who organized the Daily Herald’s campaign launch. He captioned this poster “Soaring to Success, the Early Bird,” and called it “a flight of birds that might almost be a flight of aeroplanes; a symbol, in those days of hope, of the unity of useful invention and natural things” (Kauffer, p. 18). As Kauffer stated in 1950: “The design Flight was not invented in a studio. It came after much observation of birds in flight… Birds in flight and aeroplane formations are singularly alike. The arrowhead thrust is the dominant motif. But wings have a contrary movement—so this too has to be considered…” (Kauffer, p. 17). The success of this poster is, in part, due to his astute observance of nature—but it’s also admired for its innovative composition and form. The much larger three-sheet poster is in the collection of the Victoria and Albert Museum in London; this smaller version is in the collection of the Cooper Hewitt Smithsonian Design Museum and was donated by Mrs. Edward McKnight Kauffer.

This sensuous, unencumbered design is perhaps one of the most provocative newspaper promotions ever created. A larger-than-life nude basks by the seaside, her head reclining into the trees, her pose orgiastic, the earth beneath her fertile. The sun, anthropomorphized, gazes upon her either with longing or wonder. Is she Eve, relishing in sin? Or is she Gaea, giving birth to all the landscapes and creatures of Earth? We may never know, but Mataloni’s two-sheet design for the daily newspaper Il Mattino is a remarkable example of Italian Art Nouveau tinged with Jugendstil—and an artist’s vision of unbridled dynamism. Rare!!

From 1886 to 1947, The Brooklyn Citizen was a daily publication focusing on local issues pertaining to Kings County, NY. Here, its Sunday cartoon supplement is promoted with a “Comic Band” of characters marching merrily toward the viewer. McCutcheon was born in Indiana and went on to become a celebrated political cartoonist, war correspondent, combat artist, and author; in 1931, he was awarded the Pulitzer Prize.

Penfield gives us a young lady, bored and overdressed; and a young man, in bathing costume, smoking a cigarette, suspicious and perturbed by the woman’s boredom. It’s a perfect, succinct graphic narrative, both true to life and effortlessly hilarious.

L’Estampe et l’Affiche was probably the most influential publication in the field of color lithography in France at the turn of the century and, under the editorship of André Mellerio, it did much to encourage poster art in the brief period of its existence. In an article in the magazine announcing the publication of this poster, the critic Crauzat is full of praise for it, indicating that its clear tones and design show the artist to be a master of decorative effect. As far away as London, The Poster magazine also lauded the work: “On the green summit of a cliff, two women—one lying down and the other sitting—giving a back view of themselves, look far away into the dying perspective of the ocean. Their dresses, respectively red and blue, give two beautiful contrasting notes to the ambient tonalities. Mountains encircle the bay, the calmness of which is disturbed only by the modulated swing of a smack. The colours are cleverly harmonised, and the light line of water produces a very good effect” (June 1898, p. 28). This is the rare version with complete text.

This poster was created to advertise Willette’s magazine, La Vache Enragée, which lasted for only a single year. Wittrock, who rates the rarity of this state as “uncommon,” also indicates that “the image in the poster was drawn by Toulouse-Lautrec in imitation of the style of A. Willette” (p. 808). This is one of the few Lautrec posters with movement: the runaway cow is the centerpiece of a remarkable caricature depicting sheer panic in some, curious complacency in others—an obvious reflection of the world that swirled around the artist. Julia Frey explains in her wonderful biography of the artist, “Henry shows a vachalcade, the cavalcade of starving, angry artists for whom the magazine was spokesman, attacking Senator Béranger, whose morals squad was trying to censor them” (Frey, p. 421-22).

Night. The downtrodden trudge with their belongings down the empty avenue. Their backs are bent, the cart is freighted, the horse strains at the load. It’s a completely counterintuitive—and brilliant—way to advertise the new Socialist periodical L’Aube (“The Dawn”), which appeared on the racks of the bouquinistes in May, 1896. Lautrec designed the scene in turquoise, using his spatter technique to suggest the grainy quality of the day’s first early, uncertain light. Ebria Feinblatt points out that “the robust female pushing the cart illustrates Lautrec’s mastery of movement, here almost geometrized in her shape” (Wagner, p. 29).

This is just the beginning…
You’re invited to bid on these items
(and many more!) at auction
Sunday, February 23, 11am EST
Order the full PAI-LXXX: Rare Posters catalogue now
for full details on all 520 lots
ORDER CATALOGUE
Special Offer!
Order The Next 4 Auction Catalogues And Get 1 Free!
$120 ($180 outside U.S.)
ORDER NEXT 4 CATALOGUES
Register to bid online or by phone or absentee

Who is she? Muses, models, and starlets in posters.