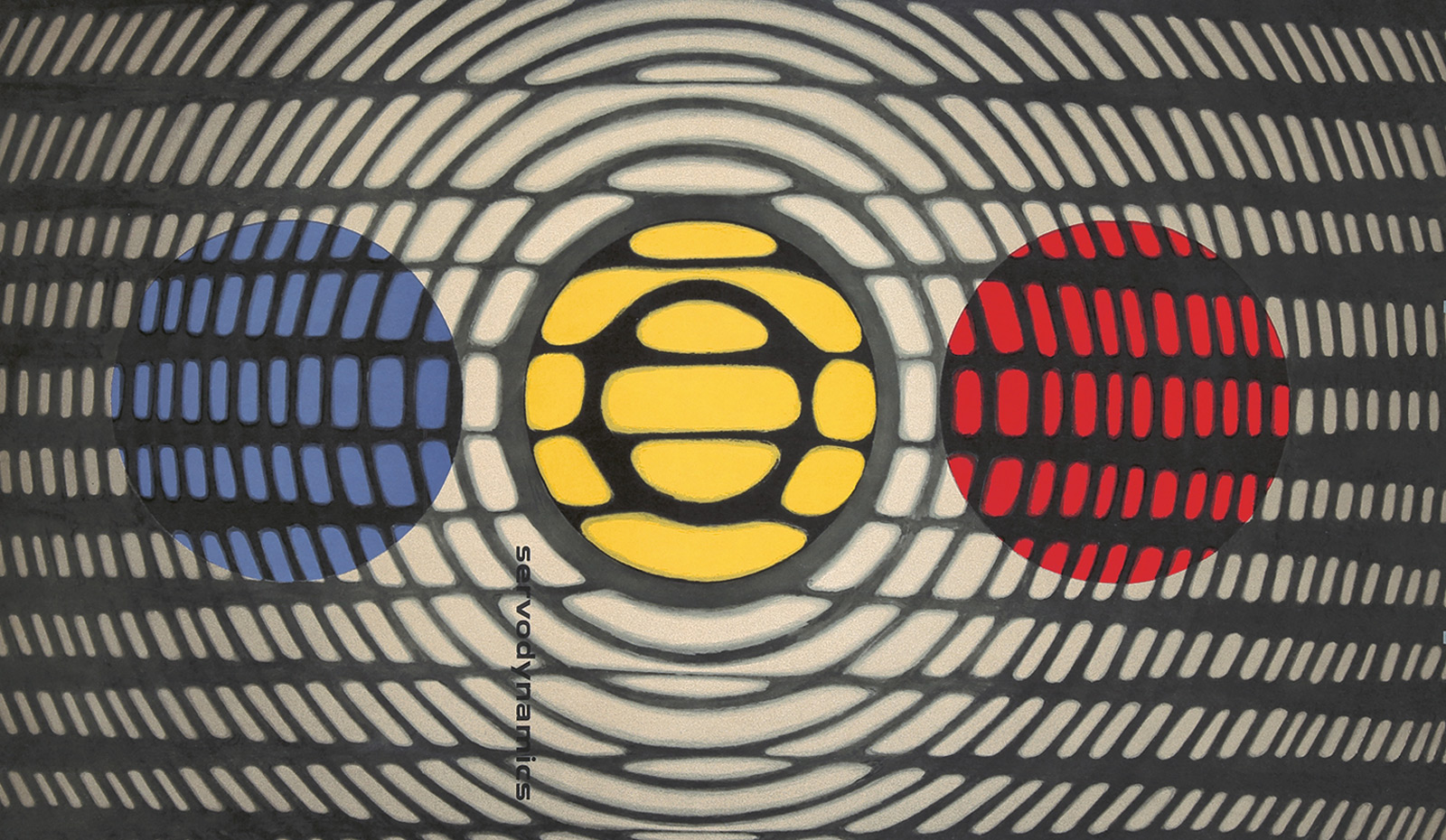 Technology – rapidly evolving technology – is so much a part of our world today, it can be bizarre to imagine a world before this one. That’s why vintage posters are such remarkable artifacts: advertisements like these connect us to the moment a new technology is introduced; they enunciate, even prompt, a sea change in our relationship to the world.

Take the “Silhouettes” iPod campaign: would the iPod have ever taken over the planet, triumphed over all competitors, and ushered in the smartphone revolution without a campaign emphasizing hip freedom? Maybe. But it’s debatable. Here are some other brilliant examples of tech ads, when lithography was state-of-the-art.

Just try to avoid falling in love with this pitch-perfect example of Mid-Century Modern design for the German car-radio manufacturer Blaupunkt. The brand name was originally founded as “Ideal” in 1923; in 1938, it changed its name in reference to the “blue point” or “blue dot” affixed to its headphones that had passed quality control. The KMMML on the pushbuttons refer to radio wavelengths. Blaupunkt, sadly, entered bankruptcy in 2015 and was liquidated in 2016, leaving wonderful posters like this as a memory of its audio-tech precision.

“I can be visited in bed by the brook and the birds of [Beethoven’s] Pastoral Symphony,” wrote Marcel Proust, because of the wonderful invention of the Théâtrophone. Clement Adler invented the prototype in 1881 (the first demonstrated use of binaural audio) to broadcast a Paris Opera performance to listeners at the Palais de l’Industrie. In 1890, however, the technology became commercially available – and Chéret’s poster was the definitive advertisement for it. In lightning-quick time, home subscriptions became available, while Théâtrophones were set up in hotels, restaurants, cafés and vestibules throughout Paris. Fifty centimes bought you five minutes of live music straight from the Ópera Garnier. Today, 3D audio in headphones and VR is an innovation derived directly from the binaural audio innovation of the Théâtrophone: making this poster an important artifact in the history of the recording arts and sciences.

Polychromatic, nuanced, cathedral-organ sound is the promise of Radiola Radios. Ravo designed at least four ads for the radio and television-tube company. This poster, created in 1939, uses a ghostly purple mist toward the bottom to conjure up the magical memory of the theater Würlitzer. In the 10 years since Al Jolson’s “Jazz Singer,” live organ accompaniment to silent films had fallen out of popularity, as “talkies” took over the cinema – making this poster a fascinating example of nostalgia being used to enhance a technological innovation.

Any wordsmith knows the feeling of being in the Flow: the steam-train of words, paragraphs, and paper barreling into the night. Ironically, the invention of the QWERTY keyboard was meant to slow down the typist, to prevent the keys from jamming on early and unrefined mechanisms. Olivetti typewriters have always been luxury objects to the scribe: beautiful, elegant, and wonderful action on the keys. In 1929 Olivetti opened their first branch outside Italy, in Barcelona, leading to the Hispano-Olivetti brand. Hispano-Olivetti had at least one other “typewriter-like-a-train” poster made; this appears to be the refinement of that first “cinematic” attempt, and the result is an absolutely smashing fusion of 1930’s avant-garde Art Deco with the refined, almost antique bulk of the Olivetti.

Barrère went to law school and then medical school, thought both professions absurd, and then turned to caricature, thereby becoming famous. His posters revel portraying the (knowing or unknowing) absurdity of elite figures, and this hilarious poster is of a piece. It’s advertising a kind of “turning heel” constructed without screws or a plate – perhaps for dancing? It “rallies all the votes,” Barrère says while portraying a politician, hat doffed (so that you may put money in it?), while identifying how he will “turn on his heel” in an ascerbic comment on the dance of politics.

On December 8, 1953, President Eisenhower announced to the world the threats and promises of the nuclear age. “My country’s purpose,” he said, “is to help us move out of the dark chamber of horrors into the light, to find a way by which the minds of men, the hopes of men, the souls of men everywhere, can move forward towards peace and happiness and well-being.” This was the “Atoms for Peace” speech, and an approach taken up by General Dynamics CEO John Jay Hopkins in 1955. General Dynamics built the first vehicles and products powered by nuclear energy, and wanted to upgrade its image and emphasize peaceful applications of its capabilities. The rollout of its comprehensive new advertising platform, “Atoms for Peace,” was unveiled at the Atomic Energy Conference in Geneva in 1955. With much of its work secret, an exhibit of actual hardware was out of the question; General Dynamics found Erik Nitsche to express its achievements and goals in graphic terms.

We have nine of Nitsche’s best in our June 26 auction; see all of them here.

In a stroke of real genius, each poster has a different subject, and was printed in a different language, addressed to people in myriad nations around the globe – pairing each language with a challenge, and an atomic solution, in a way that was poetically appropriate for the language. Case in point: this one for Servodynamics.

Servodynamics is, put very simply, the science of creating motors that, working together, can precisely fix an object’s position, speed, and rotation. One idea was that rates of atomic decay could create very precise measurements. Nitsche has a brilliant solution to visualizing this complicated concept: interferometry. You’ve seen this experiment before: moving two lenses in order to identify the wavelengths of light. Enrico Fermi, who born in Rome, set his trajectory and changed his position to the United States in 1938, as war loomed over Europe, and was the first to establish a controlled nuclear chain reaction at the University of Chicago, we note, observing the Italian text.

This poster is coded with the stories of roads not taken. In 1927, a Czech opera singer living in New York, Otakar Marák, had an epiphany: he would jumpstart the sound-movie industry in Czechoslovakia.

He seized upon the idea to work with Lee De Forest (1873-1961), a radio pioneer who had invented sound-on-film recording – i.e. a “sound track” – whereas everyone at the time was trying to synch silent film with phonograph records. (De Forest had first demonstrated the idea with an opera singer performing an aria from “Rigoletto.”)

Marák got Mucha, a friend, to create the poster – an allegory of a performing artist urged on by a Muse, with the spool of a film reel signifying De Forest’s film technology. Tragically, just months after Marák conceived the idea, Al Jolson’s “The Jazz Singer” was released – using the old, inferior phonograph technology. But the all-singing, all-dancing spectacle captured the imagination of the crowds; a stationary opera singer on De Forest’s demo simply couldn’t compete.

Much later, the large Hollywood studios finally appropriated De Forest’s soundtrack technology – without paying him. De Forest was eventually vindicated, in the drawn-out lawsuits that followed, but too late to claim profits owed him. De Forest would claim, proudly, that he made and lost four fortunes.

And Now, the Glutton: Toulouse-Lautrec Today