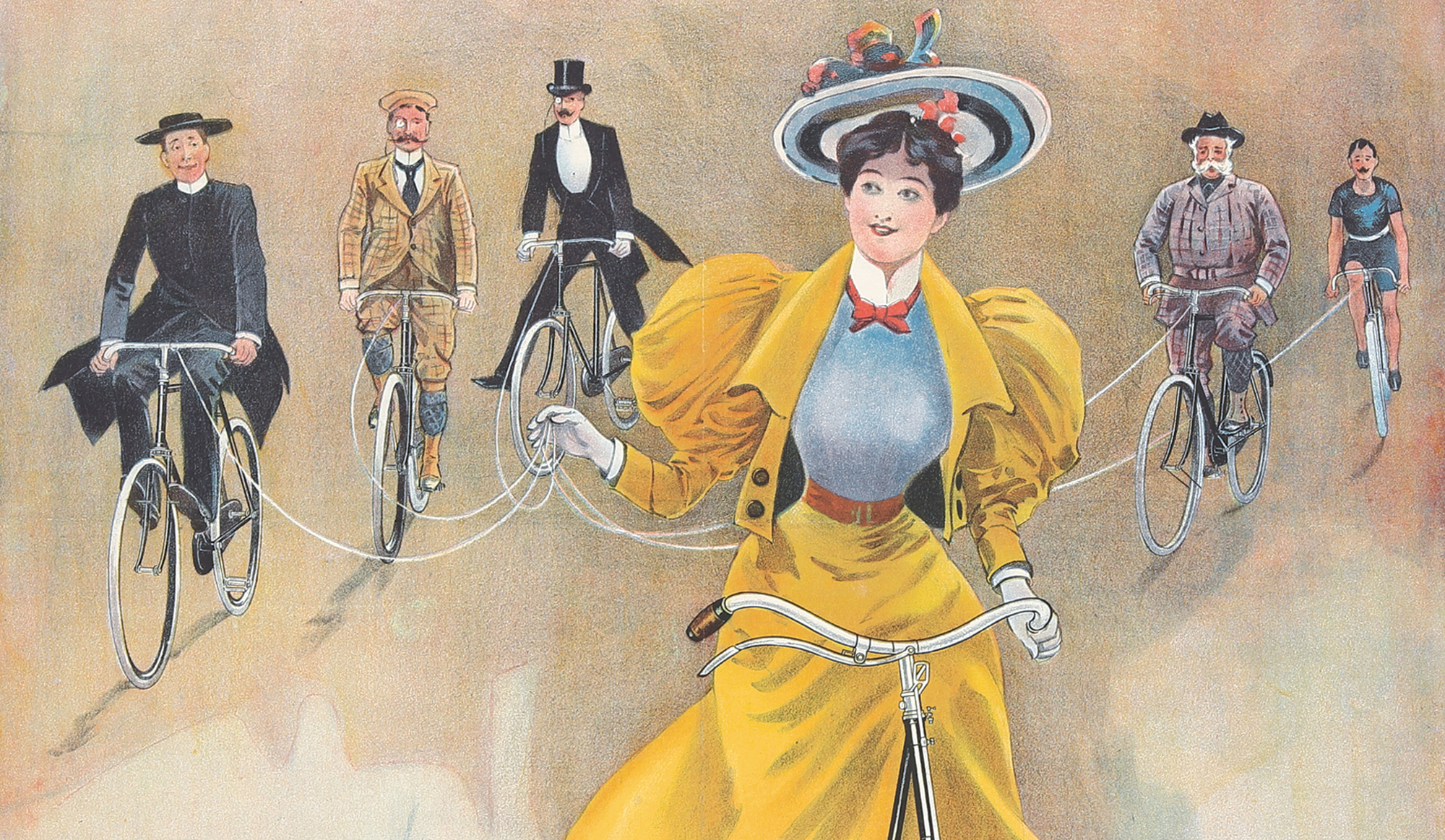 In the early days of the bicycle craze, cycling was largely considered to be a male activity. Women were thought to be dainty and weak, and therefore unable to power the pedals. And even so, women at the time were constantly chaperoned—it was only acceptable for a woman to ride a tandem or tricycle with the husband guiding the way. Still, there was another impediment to female cycling: their long skirts, which were de rigueur in the late 19th century, could easily become tangled in the spokes—and should a lady’s legs be exposed while hiking up her dress, she was considered terribly indecent. Even Sarah Bernhardt regaled against women wearing bloomers for fear that they might relinquish their femininity. There were also some beguiling fears about blurred gender lines: men thought that perhaps a woman might take on masculine features if she rides a bicycle, or perhaps she’ll detract from the masculine appeal of cycling.

Nevertheless, women were tired of being cooped up at home, and they wanted to experience the same freedom of travel as men. The safety bicycle was developed in 1894, and this allowed women the momentous occasion to finally cycle on their own.

The [safety] bicycle fills a much-needed want for women in any station of life. It knows no class distinction, is within reach of all, and rich and poor alike have the opportunity of enjoying this popular and healthful exercise.

Advertisers were quick to realize that if women began riding bicycles, then their marketing tactics would have to adapt to increase sales. This proved to be a key moment of transformation: female consumers needed to see themselves in advertising, and the posterists obliged them. For the first time ever, women were given a key element to attaining independence—the bicycle, and all the roving possibilities that entailed—and posters emboldened this new assertion of power. Female cyclists were depicted as goddesses, warriors, angels, enchantresses, and arbiters of their own desires. In posters, the women were in charge.

The patriarchy still had its doubts, of course, and men feared that this proliferation of female-empowered designs would encourage women to seek out illicit affairs during their escapades—moreover, the men’s sense of authority over their wives felt threatened. In 1896, Munsey’s magazine decided to defuse their male readers’ outrage. They wrote:

If she has ridden her bicycle into new fields, becoming in the process a new creature, it has been gradually and unconsciously. She did not have to be born again in some mysterious fashion, becoming a strange creature, a ‘new woman.’ She is more like the ‘eternal feminine,’ who has taken on wings, and who is using them with an ever increasing delight in her new power.

As it turns out, there were many advocates for female cycling. In Lillias Campbell Davidson’s book, “Hints to Lady Travellers at Home and Abroad,” she urged women to “thoroughly understand the use of every nut and cog, and be able to put right any small derangement that might occur in the course of her rides.” In being self-reliant, the female cyclist could eliminate concern about being stranded due to mechanical failure. Another advocate of female cycling, Frances Willard, published “A Wheel within a Wheel: How I learned to Ride the Bicycle” in 1896. In it, she writes of the restrictive and agonizing clothing that women are expected to wear while riding and calls for action:

If women ride, they must… dress more rationally… If they do this, many prejudices will melt away. Reason will gain upon precedent and ere long the comfortable, sensible, and artistic wardrobe of the rider will make the conventional style of women’s dress absurd to the eye and un-durable to the understanding.

Meanwhile, posterists continued their work of appealing to both female and male consumers. Their depictions of powerful goddesses could inspire female audiences, but they could also be made attractive to men (the oldest adage of advertising, of course, is that sex sells). In this way, advertisers could sell the idea of machines to women and also sell the idea of women using machines to male audiences—a double marketing whammy.

To men, the bicycle in the beginning was merely a new toy, another machine added to the long list of devices they knew in their work and play. To women, it was a steed upon which they rode into a new world… In fact, it was the best gift the nineteenth century has brought her.

Ah, how the tides have turned. Eight years after creating his very polite design for Quadrant Cycles (seen at top), G. Moore has been swayed towards feminism. Like the revered mythological figure depicted in François Boucher’s 1740 painting, our turn-of-the-century Venus is once again triumphant—and she’s calling the shots over her male colleagues. The Triumph Cycle Co. was founded by German ex-pat Siegfried Bettmann in 1886 in Coventry, England. The Victoria Triumph bicycle depicted here was released in 1897 and designed specifically for ladies.

Today, Bradley’s design is considered to be one of the greatest examples of American poster art; note the intricate details, the ornate patterns, and the rhythmic variety and organic flow of line. But in 1896, it was still radical to show three stylish ladies cycling around town on their own, and it perhaps contributed to Munsey’s need to issue literary xanax to their disturbed male readers that very year.

Women’s cycling empowerment spread to Germany, and in 1897, the first high-altitude cycling track opened in Dresden—and to top it off, they offered female-taught cycling lessons.

While Gaudy was likely portraying the array of new technologies available from Delin, he has also delineated a sharp contrast between the active solo cyclist and the passive passenger in the moteur. We can’t help but root for the stylish lady on the bike and applaud her saucy pose.

Bottini elevates the femme cyclist to haute couture. This racetrack scene boasts four high-class socialites and one man who has been drawn to their allure—but the ladies don’t seem as interested in him as they are in their two-wheeled steed.

During the nineteenth century mythic female figures were much more than decoration: they loomed as goddesses of industry and the machine, becoming the apotheosis of modern industrial progress itself. Elevated rather than grounded, these towering women were larger-than-life goddesses [and] icons of industry.

— Julie Wosk, “Women and the Machine”

Though we’re still in the 1890s, Gray has fully embraced the drama and heavenly allure of the feminine cyclist. An angel, brilliantly lit by the rays emanating from the brand name, frolics with the bicycle’s wheel in deep blue space. It’s nothing short of sensational.

In one of the most iconic goddess-cyclist posters, Thiriet manifests the power of Nike, the Greek goddess of strength, speed, and victory. “This is yet another example of the Art Nouveau poster at its stylized best. The composition has been meticulously—almost geometrically—arranged, and the influence of mythology, in both the Greek name for the bicycle brand of Kreutzberger and the winged goddess, plus the bold use of flat and vibrant colors emphasize this. The Omega is chainless (‘Sans Chaine’) even though continuous-chain-driven bicycles were being produced at this time. It worked by means of bevel gears” (Bicycle Posters, p. 9).

“It is clear that Mucha understood well the principles of selling not the object itself, but the feeling that is associated with it. Here, he is barely showing a piece of the bicycle… but as to the pleasure of riding, this sylph has it all over any dreary mechanical details. Airily she caresses the machine, her windblown hair embodying motion and a restless spirit, a vision of idle loveliness and a perfect Mucha maiden. Her gaze at us is straight and direct, not flirtatious but inviting and challenging, daring us to take her on in a race… Mucha finally had a perfect subject that justified hair in motion, and he took full advantage of it, giving her the most dizzying configurations of his famous ‘macaroni’ [hair]. The Perfecta was an English brand bicycle, which makes this one of the very few Mucha posters for an English client. It was also sold in France” (Rennert/Weill, p. 294).

This is one of the most famous posters in the world—often copied, and often poorly. Note the exquisite detail in our Valkyrie’s chain-mail miniskirt, with textured rings and metallic shimmer. Pal’s triumph here is the culmination of the “Bicycle Craze” of the 1890s, when female riders finally achieved some level of liberation—and had enough steam to power forward into the suffragette movement.

Let me tell you what I think of bicycling. I think it has done more to emancipate women than anything else in the world. I stand and rejoice every time I see a woman ride by on a wheel… the picture of free, untrammeled womanhood.