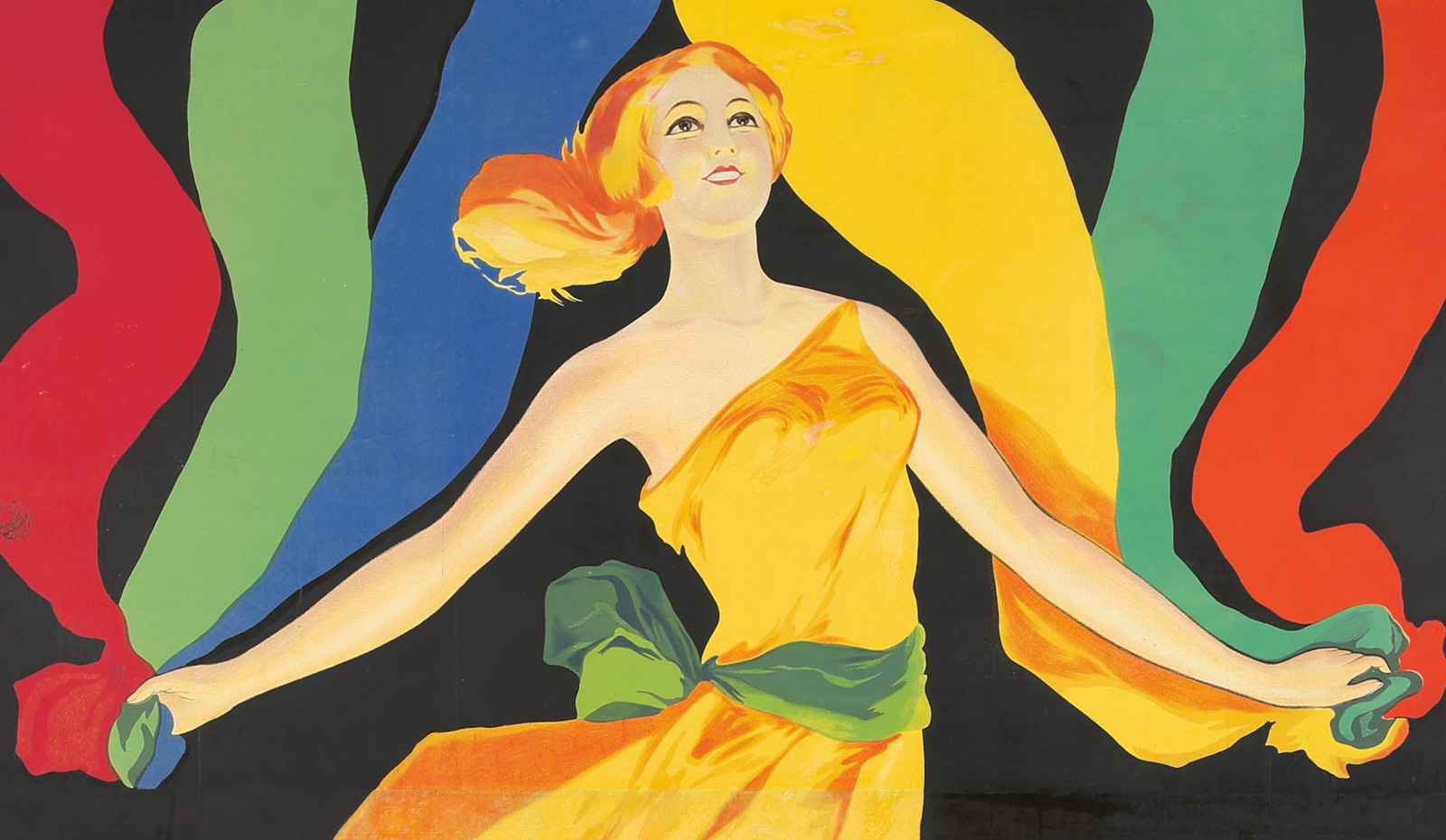 A vintage poster is a great way to deliver an immediate, quick, bold burst of color and emotion into a room. Especially during the drab days of winter, a cavalcade of myriad hues is especially enjoyable – and food for decorating thought!

Colored Chinese lanterns tumble out from the darkness, along with a crimson-headed sprite championing Teinture Idéale dyes: an exuberant work at the apex of the Art Deco period, courtesy Jean D’Ylen, who succeeded Cappiello at the Vercasson printing house.

Hats off to this riotous celebration of early aviation, with no fewer than six aircraft designs buzzing over the 11th-century tower of the Abbey of St. Bertin. We can spy two Blériots up above; that box-shaped contraption is most likely a Curtiss. The remarkable color scheme here, consisting of just orange, purple, patina-green and black hues, captures a sensation of dawn light in August and a taste of fresh awakenings.

Villemot has posed the two nude dancers to look like a lotus blossom. His study for this poster was, in fact, titled “Lotus” and on publication was quickly dubbed “Les Femmes-Fleurs.” The inspired choice of colors for the shoes, in an eerie coincidence, resembles the stockings in Socha’s poster for the 1974 film “Moja Miłość” (357). The bottom text panel has been eliminated in this specimen.

In a scene straight out of comic books 30 years later, a magenta plane swoops into a bright yellow sky, with the Marvel-esque Farman logo emblazoned in turquoise over an orange sun: heroic imagery typical of the brave new airline industry of the 1920s. The Farman brothers founded this company in 1919. Solon was its official posterist before its merger with Air Union, CIDNA, and Air Orient in 1933, and he continued to design for the new company that emerged, Air France.

Known as “The Don,” the shadowy icon of the Sandeman port & sherry company is one of the most recognizable figures in poster history. He is typically thought of as a Portuguese horseman, quietly reveling in the simple delights of a glass of ruby port. While there have been many reissues of the image, this is the original from 1928.

“The Magic Flute” has just concluded its 2017 run at the Met; but you can keep Mozart’s triumphant tale of love alive with Marc Chagall’s rapturous poster for the Met’s 1967 production. Chagall created the sets and costumes, so it’s no surprise he would create the poster, as well. It borrows a detail from “The Triumph of Music,” one of two large murals that flank the entrance to Lincoln Center. A native of Vitebsk, Russia, Chagall arrived in Paris in 1910 and soon made a name for himself in art circles with his surreal, poetic dreamvisions. The “welter of color” Chagall splashed onto the Met’s stages received mixed reviews, but his visual interpretation of Mozart’s final, joyous opera influenced the Met’s stagings through the 1981-82 season.

A smart-looking yellow Donnet appears at the top of a hill on the Côte d’Azur; the sweep of the beach below provides the illusion that the car itself is sitting on the crest of a wave. It’s “the car that climbs, the brand that’s climbing.” It could serve as a motto for Brodovitch himself: born in Belarus, he fled to Paris during the Communist Revolution, painted backdrops for for the Ballets Russes, and won a competition for his poster for Le Bal Banal (see PAI-LXXIII, 220). His success with posters led him to art-direct Harper’s Bazaar from 1934 to 1958, and teach at Pennsylvania’s University of the Arts.

One of the greatest films – and one of the greatest film posters – of all time, Olivetti’s gorgeous and rhapsodic two-sheet extravaganza features Anita Ekberg and Marcello Mastroianni looking gorgeous. This Olivetti poster was printed in 1959, for the original Cannes Film Festival release, and as such is quite rare!

A predecessor to D’Ylen’s work for the same dye manufacturer (first poster, above), this brilliantly hued rainbow of Art Deco drama is an oversized delight: a two-sheet poster.