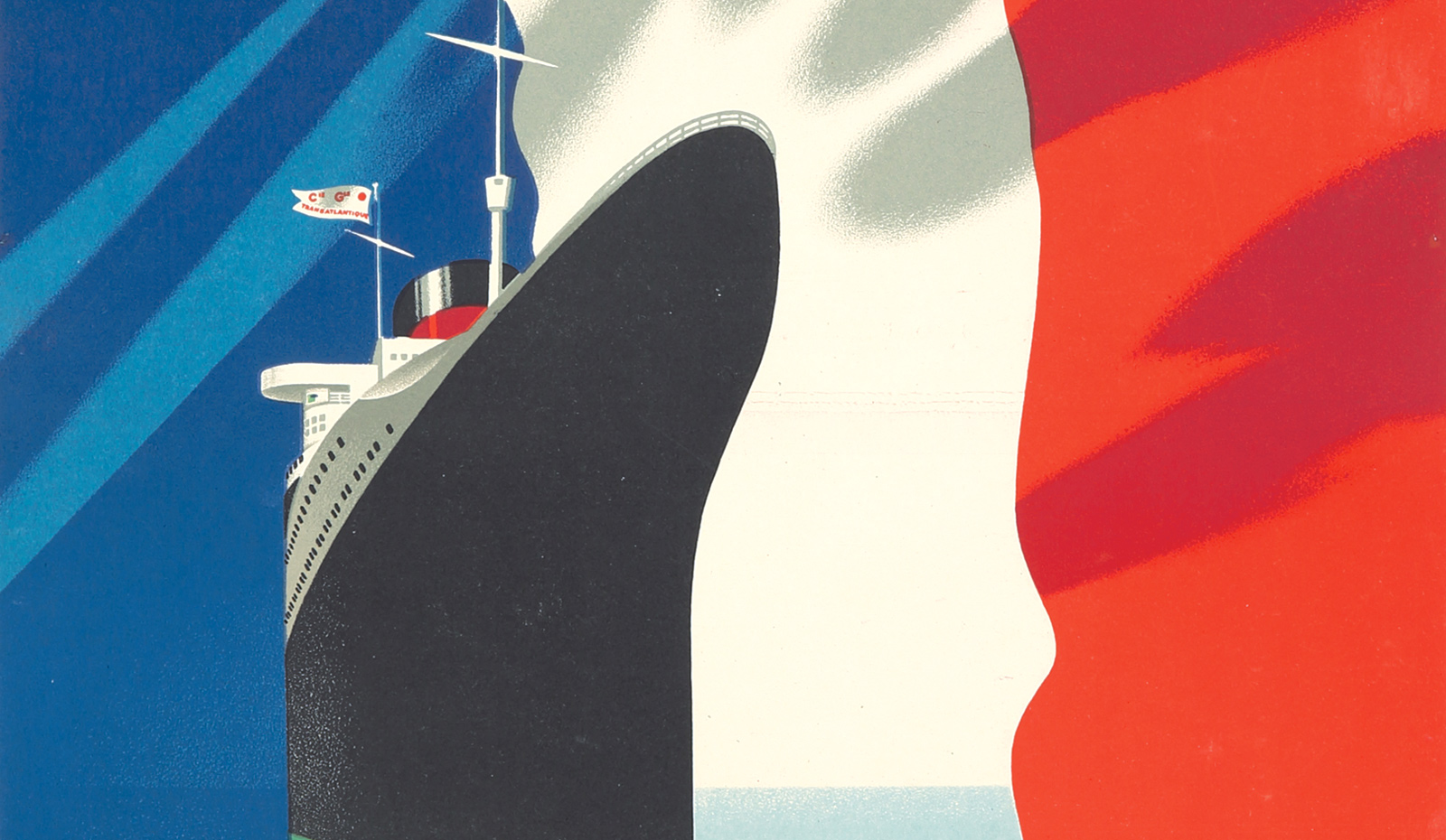 Our 79th Auction is not just overflowing with high-end masterpieces—there are plenty of great works with reserves under $1,000 as well. Whether you’re new to collecting posters, or on the hunt for something a bit more unconventional, our Creative Director Jim McCobb has got you covered. Read on for his selections and notes on each lot.

This is one of my favorite bicycle images, and it’s the small format version of the poster—that’s why it’s so affordable! It has all the hallmarks of Art Nouveau design: the beautiful girl, wild spaghetti hair, a perfect sun dress, and excellent typography. Learn more>>>

Irish posters are rare; we don’t get them often. I love the detail on the Monasterboice Cross in the foreground and the idyllic stylized countryside that gives way to a mountain range on the horizon. And yes, the Irish are as friendly and welcoming as the folks in this poster—and the countryside is equally beautiful. Learn more>>>

Colin creates a graphically strong image with only a subtle touch of aquamarine emphasizing the ship in its natural environment. Learn more>>>

As a kid, Tom & Jerry was one of my favorite shows, so this poster makes me extra nostalgic. I have to admit, I always rooted for Tom and loved the rare moments when Jerry got his comeuppance. Plus, it’s a super fun image. Ps. Is Tom’s rival Lightning holding a Höfner bass guitar? Learn more>>>

This poster is pure graphic design. Keeping things simple is the best way to communicate, and here, Bass doesn’t get bogged down by trying to say too much. Bass’ works are the high water marks of the modern graphic design style of the late 50s and early 60s. Learn more>>>

Another poster where simplicity reigns—and it’s a wonderful image of 1950s nostalgia. It doesn’t feature any of the stars from the movie, but instead focuses on where the action is. Although they seem like opposite ends of the spectrum, “American Graffiti” and Lucas’ follow-up hit, “Star Wars,” have a lot more in common than initially meets the eye—from the fast cars and space ships to the adventures and changing relationships of a group of friends. Both films were inspired by nostalgia: “American Graffiti” was based on Lucas’ teenage years, and “Star Wars” was influenced by the “Flash Gordon” serials he watched as a child. Learn more>>>

I love the design, color, and typography in this design. Although it’s from 1963, it looks like it could have been designed yesterday. For more examples of Rivadulla’s excellent and creative use of typography and font design check out this selection of his works promoting the Cuban Revolution.  Learn more>>>

It was 50 years ago today… or so the story goes. This is the original Woodstock poster before they changed the location to Max Yasgur’s farm, and it’s an essential rock music and counter culture artifact. Learn more>>>

Fatherhood has turned me into a sentimental sap, and I love this image. The sleepless nights, changing diapers, and temper tantrums all get wiped away during beautiful moments like this. Do you know what it took to get her into those polka dot pajamas? Learn more>>>

This poster was designed for the 1986 “Crackdown on Crack” benefit concert. It’s a really great and effective Haring image with a vibrant color palette—plus undeniably good word play.  Learn more>>>

Hohlwein is one of the all-time great posterists. This is a lesser known image, but a great find for the cat obsessed collector. It has a unique color palette, a visual directness, and details that really capture the beauty of the lynx. Learn more>>>

I’m tripping balls, are you? Seriously, scroll up and down while looking at this image. You won’t need any drugs. Nitsche did a series of posters for General Dynamics and they could easily be classified as proto-psychedelic sci-fi. Learn more>>>

A beautiful Art Nouveau image by the first lady of posters, Elisabeth Sonrel. If this was made by Mucha it would be worth a gazillion dollars. Learn more>>>

It’s War-hull actually, hull, hull, as in hulls. Andy Warhol. Warhol used his silkscreen color-washing technique to create some of the most iconic images for the Perrier. It’s not Marylin Monroe or Chairman Mao, but it is quintessential Warhol. Learn more>>>

View all Warhol posters.
View All Posters Available October 27
Live auction begins October 27, 2019 at 11am EDT
Join us in person, register to bid online, or bid by phone or absentee.
It’s better with a book.
Order the full Rare Posters catalogue now
for full details on all 530 lots
ORDER CATALOGUE
For orders to be shipped outside the US please click here.

Poster Art of the Summer Olympics

Hats off to Art Deco!