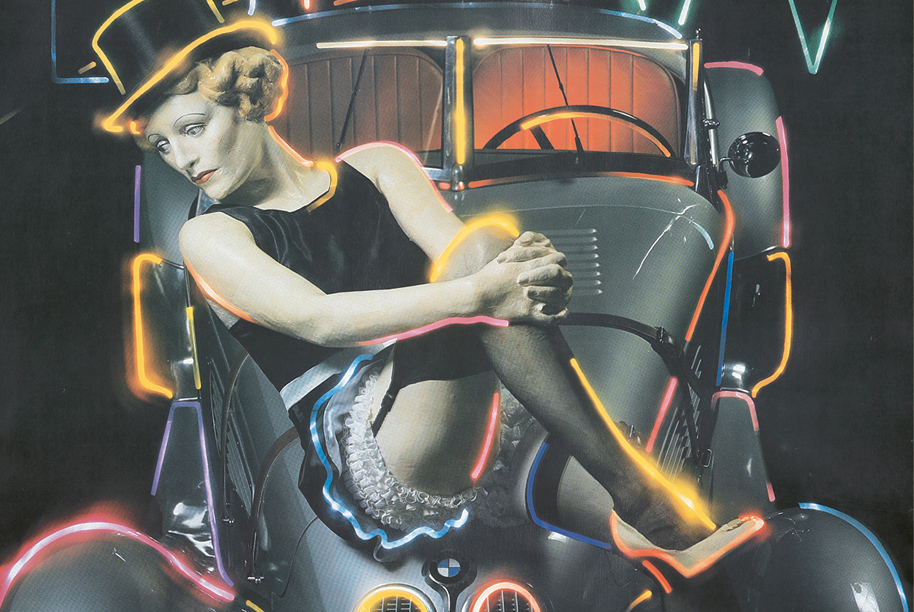 Our 78th Auction is not just overflowing with high-end masterpieces—there are plenty of great works with reserves under $1,000 as well. Whether you’re new to collecting posters, or on the hunt for something a bit more unconventional, our Creative Director Jim McCobb has got you covered. Read on for his selections and notes on each lot.

In Dorfi’s ethereal design, one could imagine riding a bike so lightweight that it whisks its rider straight out of the earth’s atmosphere. And what a delight it would be to ride amongst the cosmos and blow a kiss to a friendly moon amidst the star stuff. The company itself seems to be unearthly, as we haven’t been able to find any solid information about it—and this poster, too, is rare!

Jim’s thoughts: Even after photographing the 500 lots and laying out the catalogue, there are a few images that don’t hit me until I see them again later. It wasn’t until our Editorial Director included this in a newsletter that I fell in love with it. It’s incredibly charming, and Dorfi’s subdued palette tells a simple story. It’s as if our cover piece decided to take a moonlit bike ride.

In this poster for the BMW Museum’s exhibition, a Dietrich mannequin poses on a car, and everything is outlined in vibrant neon highlights in assorted colors. Kieser, Germany’s top post-war posterist and one of the world’s best, could always be relied upon to come up with startling ideas. He has had one-man exhibitions of his posters in many countries, from Lincoln Center in New York to the poster museum in Essen, Germany. He continues to produce fine posters after retiring as a professor of visual communications at the Wuppertal College.

Jim’s thoughts: Kieser created a timeless design by juxtaposing vintage emblems with modern details: Marlene Dietrich and a classic BMW made edgier with a contemporary typeface and neon lights. This is a poster that looks and feels much more expensive than it really is.

David Klein created a version of this poster with the word ‘Miami’ emblazoned across the sky—but this paired-down version is just as evocative of the golden sunlight in Florida’s bustling seaside city. Be sure to bring your most stylish sunglasses for traipsing through the Design District or lounging on the beach.

Jim’s thoughts: We have a lot of great airline travel posters in this auction, but this one by David Klein is my favorite. There’s almost a religious fervor to it—the balmy sun as king of Miami—and the chic glasses and modern resort hotels perfectly communicate the dawn of the cosmopolitan jet age.

Between 1893 and 1900, Chéret created a multitude of captivating designs for the Palais de Glace, a large skating rink located on the Champs-Elysées. Here, the brightly-dressed beauty, complete with fur stole, glances back toward us with a flirtatious look, while her forward arm seems to suggest, “This way, love!” This is the Courrier Français supplement from January 28, 1894.

Jim’s thoughts: Chéret is the father, the grandfather, and the godfather of the poster. His style is so unique and integral to graphic design, illustration, and typography that we tend to take his work for granted. His numerous designs for the Palais de Glace reveal a shrewd craftsman who knew how to create an attractive design using a limited color palette.

Paul Colin not only designed posters for the revolutionary Ballets Russes—he also made significant contributions to the troupe as a theatrical designer. In 1952, he again provided his creative services—this time, for a summer resort ball at the municipal casino, which was surely a festive occasion. Colin’s spectacular brevity once more comes to the fore: the vivacity and flare of the evening’s festivities are encapsulated in the sole dancer’s featureless form—she’s exuberantly lost in the purity of uninhibited movement.

Jim’s thoughts: Paul Colin is one of the all-time great poster artists—his designs for Josephine Baker defined the Parisian Jazz Age. Here we find Colin further down the road in his career projecting a more Modernist style. Colin could adeptly capture movement and dance with a single gesture, and this poster is no exception.

Munich’s “Three Colors” Artists’ Society hosted a number of experimental balls, including a series of Hexensabbats (Witches’ Sabbaths). Several of these Carnival parties took place at Der Blüte in Munich—but unlike other hellish themes, this year’s theme appears to be a bit more flapper-chic than broom-riding witch-wear. Surely, a wild time was still had by all attendees. For other designs for the group’s events, see nos. 198 and 284.

Jim’s thoughts: We have a macabre collection of Munich Party posters in this auction, but this clever design by Roman Feldmeyer really caught my eye when I photographed it. The masked reveler’s yellow skin against the pink and red backdrop is an ingenious design move. She isn’t attractive; she isn’t ugly; but she’s definitely up to no good. What’s behind the curtain? You’ll have to come to the party to find out.

Artists have always been trendsetters, and this promotion for a 1926 artists’ ball is no exception: “the fashion of tomorrow” is the theme, and the designer has created a most futuristic design with pulsing colors and playful abstraction. The event was hosted by Maison d’Art Alsacienne, an organization that is still in existence today as The Association of Independent Artists of Alsace, or AIDA. Given their longevity, events like these must have been can’t-miss soirées.

Jim’s thoughts: This image took me a while to figure out, but it is one of the most playful designs in the auction. The color palette and style foreshadows punk. As a massive fan of RuPaul’s Drag Race, I can’t help but think of season 11 winner Yvie Oddly’s contortionist lip sync battle with runner-up Brooke Lynn Hytes.

A TV baby is born in celebration of Haring’s 1984 exhibition at the University of Iowa Museum of Art. The text at bottom details an artist lecture at the museum, a performance by the Johnson County Landmark Jazz Band, and an elementary school open visitation to help the artist paint a mural in the school’s library—which still exists today. It’s a solid testament to the artist’s commitment to connect with people of all ages through his work.

Jim’s thoughts: One of the most striking color palettes used in graphic design is the combination of red, black, and white—and Haring’s use of white is exactly where it needs to be. The image predicts our tech obsession and addiction even though the medium might be slightly more old school. Our fealty to a means of communication has replaced our relationship with whom we are communicating. It reminds me of the 80s TV show Max Headroom, but without the dystopian wasteland.

Hernandez was clearly inspired by the famous Alberto Korda photograph that has been called “a symbol of the twentieth century” and “the world’s most famous photo.” The portrait of Che Guevara (1928-1967) known as “Guerrillero Heroico,” or “Heroic Guerrilla,” was captured on March 5, 1960, at a memorial service for victims of the La Coubre explosion in Havana, Cuba. Guevara was an Argentine Marxist revolutionary, politician, author, physician, military theorist, and guerrilla leader. After his death, his portrait became a ubiquitous countercultural symbol worldwide—he was perceived by many to be a martyr, and leftist followers adopted his ideology and desire to create a consciousness driven by moral rather than material incentives. In Hernandez’s treatment, the iconic portrait is rendered almost as a silhouette—the image so recognizable that details are no longer necessary—and bright stars consume the scene. It’s a powerful image rife with energy, and a testament to the lasting impact of Korda’s portrait.

Jim’s thoughts: I’ve got a soft spot for Che Guevara images, and Hernandez created a fresh modern design out of an iconic image. Che’s rebellious lineage goes all the way back to 18th century Ireland. His father was often quoted as saying, “The first thing to note is that in my son’s veins flowed the blood of the Irish rebels.”

“Of this whole series, the May poster, of the girl with the two Angora cats has, perhaps, the greatest and most lasting charm. Its quaint originality and the absolute informality of its subject and the extraordinary simplicity of its treatment makes it a poster that one remembers for years after it has been put away” (Price, p. 235-36).

Jim’s thoughts: This might get me in trouble, but I love brunettes and I absolutely adore cats. Every time we have this poster at auction it will invariably make it into my top posters under $1k list. Also, I have two cats and I’ve never been able to hold them both at the same time.

Villemot created four posters for Contrex in the 1970s, and we think the two best versions (including this one) depict a a tender moment between a nude muse and her mineral water. For our other favorite, see PAI-LXXIV, 476.

Jim’s thoughts: Villemot is the last truly great and prolific French posterist. He is the bridge between the old world of posters and the branded world of modern advertising. He had a truly original way of illustrating women, and this lithe and sculptural nude is the perfect example. I love the simple palette of cyan, brown, and black.

This is just the beginning…
You’re invited to bid on these items
(and hundreds more!) at auction
Sunday, June 23 at 11am EDT

Order the full PAI-LXXVIII: Rare Posters catalogue now
for full details on all 490 lots
ORDER CATALOGUE
For orders to be shipped outside the US please click here.
Register to bid online, by phone or absentee.

Coats of Many Colors