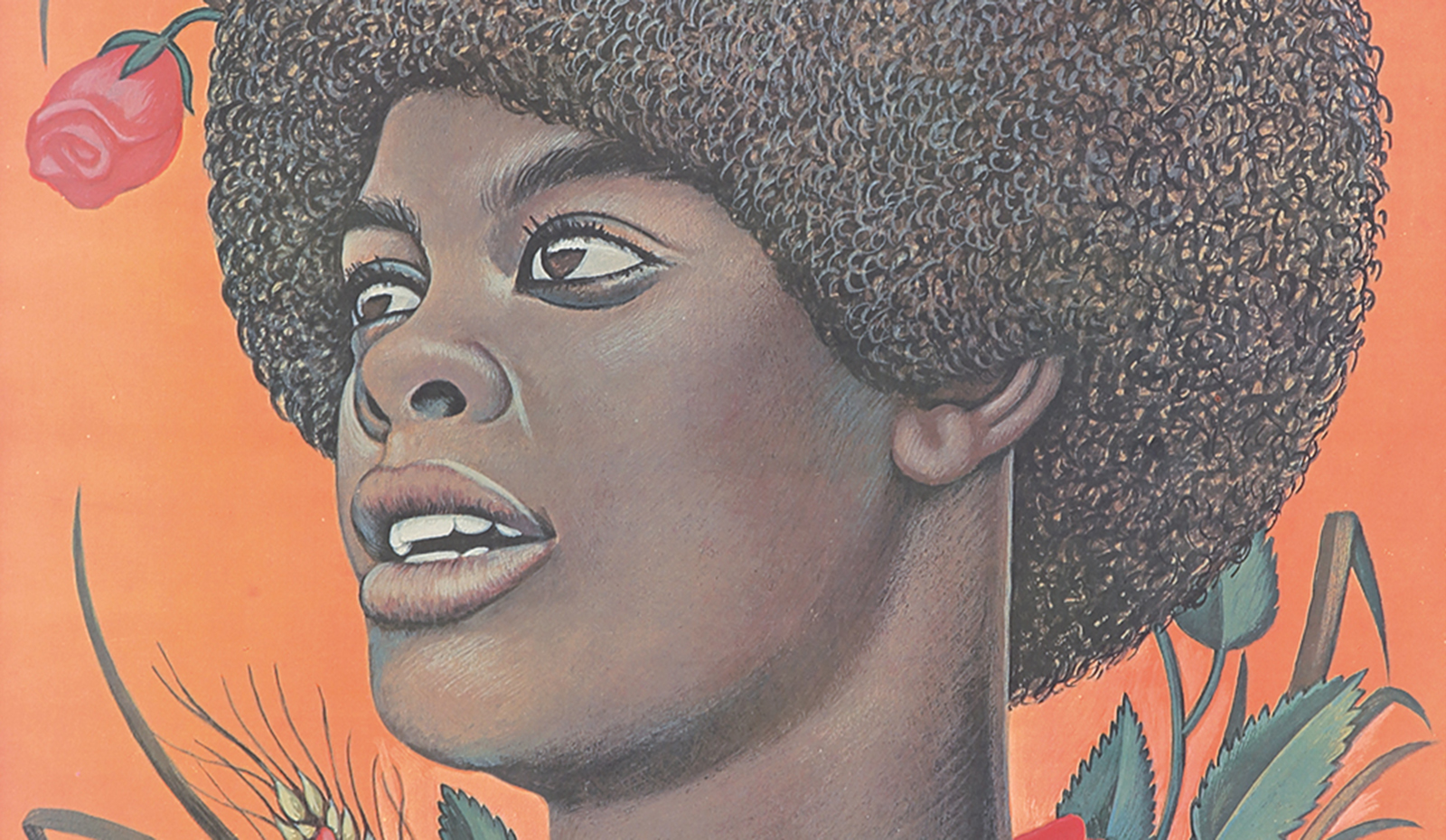 Paul Davis (1938- ) is an American illustrator and graphic artist. After attending the School of Visual Arts in New York, he created designs for Playboy, and promptly joined Milton Glaser and Seymour Chwast at Push Pin Studios. He soon began illustrating magazines, record album covers, book jackets, and advertisements, which led him to form his own studio in 1963. His extensive oeuvre has been featured in dozens of publications, and his paintings and posters have been included in many museum and gallery exhibitions; his posters are also in several collections, including the Museum of Modern Art in New York. And it’s no wonder—his distinctive style, which merges painterly portraits with bold graphic shapes, is instantly recognizable.

In 1912, James Oppenheim commemorated the struggle of striking textile workers in Lawrence, Massachusetts with a poem inspired by a banner carried by young female mill hands. The banner read, “We want bread and roses, too,” affirming the biblical adage, “Man does not live by bread alone.” Set to music by Mimi Farina and recorded by Judy Collins, the poem found new meaning in the 70s. The theme was adopted by New York’s District 1199 of the National Union of Hospital and Health Care Employees for an unprecedented two-year project celebrating the arts and humanities that remains an annual event. With more than 70% of the district’s membership being black or Hispanic, and almost 85% women, Davis chose an unidentified beautiful young black woman as his model. His painting of her, garlanded with wheat stalks and roses, became an icon of the period.

This poster portrays the two leads of Measure for Measure: a pensive Meryl Streep with late actor John Cazale glowing in the background. Between 1975 and 1991, Davis created 51 posters for the New York Public Theater, the organization responsible for the free summer performances of Shakespeare in Central Park’s open-air Delacorte Theater.

Benjamin Disraeli (1804-1881) was an English statesman and novelist whose writing and speeches were marked equally by sharp wit, individual style, and conservative convictions. As played by Ian McShane in the Masterpiece Theater series and captured here in an inimitable Davis portrait, you can almost hear him sounding forth on his trust of democratic Toryism, his belief in social reform, and his pride in empire and crown.

In 1979, MUSE (Musicians United for Safe Energy) organized five sold-out concerts at Madison Square Garden in an effort to activate anti-nuclear legislation. 40 artists performed, including a reunited Crosby, Stills and Nash; Bruce Springsteen; Jackson Browne; Bonnie Raitt; and James Taylor. As part of their fundraising effort, MUSE invited four famous New York City-based artists to create anti-nuclear or safe energy posters to be sold during the concerts. Unfortunately, the elaborate printing process was not completed until weeks after the event, and the posters were left in storage to be forgotten—until now. Paul Davis’ solemn interpretation recalls early American paintings by artists like Grant Wood—but made contemporary with the clean border and typeface.

For this knockabout romantic comedy offered during the 22nd season of free summer Shakespeare, the sepia portraits of festival regulars Raul Julia as Petruchio and Meryl Streep as Kate are surprisingly serious. Between 1975 and 1991, Davis created 51 posters for the New York Public Theater, the organization responsible for the free summer performances of Shakespeare in Central Park’s open-air Delacorte Theater.

Here, Davis portrays presidential candidate George McGovern as a populist surrounded by Americans of every age and stripe to emphasize his appeal as a healing force in the Vietnam War. McGovern ran as the Democratic candidate against Republican Richard Nixon and was badly defeated.

Top Posters with Reserves Under $1,500