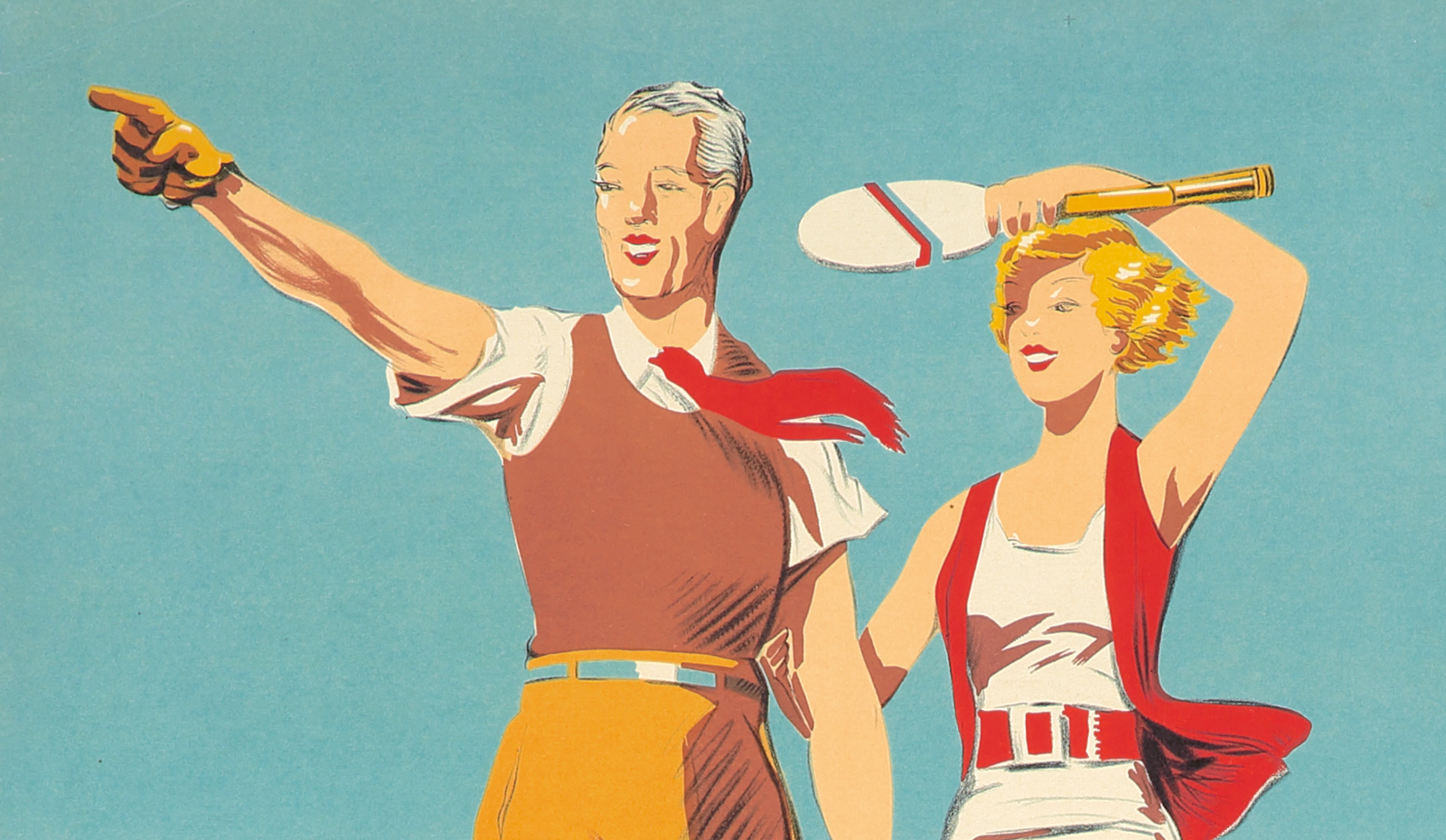 One of the biggest misconceptions about buying a vintage poster is that it needs to expensive to be considered a brilliant work of art. Our Creative Director, Jim McCobb picks ten posters from our June 26 auction that prove that notion wrong. Captions by Vintage Review editor David Schneider.
265. Job / Papier à Cigarettes. 1933.
By Leonetto Cappiello
22 3/4 x 34 3/8 in./57.8 x 87.3 cm
Est: $1,200 - $1,500

“Cappiello showed the pleasure of smoking by projecting an image of a hedonistic Middle-Eastern potentate luxuriating with a self-rolled cigarette. In fact, the imperious pasha floats on his coach like a fat white cloud – an incongruous and therefor memorable image” (Cappiello/Rennert, p. 156). A lasting design, seen here in its thirteenth printing – some sixteen years after Cappiello’s departure from the Vercasson printing house. This is the smaller format.

A young lady, bored and overdressed; a young man, in bathing costume, smoking a cigarette, suspicious and perturbed by the woman’s boredom. A perfect, succinct graphic narrative, both true to life and effortlessly hilarious.

Considered the father of the modern advertising poster, Hohenstein became synonymous with 1890s Italian opera with famous posters for “Tosca” and “La Boheme.” His appreciation for the mythological undercurrents of modern life bore much fruit, including this ingenious piece. A centaur holds a young faun or satyr, as he blows sulfur dust upon golden grapes, with a volcanic, rocky crag in the background. It’s an industrial ad for a sulfite refinery! (Sulfites are widely used in winemaking for preservative and antibacterial properties.) Hohenstein originally created this design circa 1909; it was reprinted around 1950.

Thorn-Prikker was a Dutch Art Nouveau painter and designer who also was an important figure in religious art, best known for his stained glass windows. His most famous painting is the mystical “The Bride,” created in 1893. Poster design, however, was not a sideline pursuit – it constituted an important part of his artistic practice. Here, he produces one of the more remarkable fusions of aesthetics one is likely to see: the interlacing of Vienna Secession and Asian patterns, for an exhibition of the arts of the Dutch East Indies at the Kaiser Wilhelm Museum in Germany.

Who loves winter? Raise your hand. Dartmouth’s Winter Carnival has been going strong since 1911, with a Polar Bear Swim, human dogsled races and ice sculpture contests. This 1937 poster for it is beloved by collectors as a Deco classic.

The caddy – perhaps the couple’s son – is lugging golf clubs up the cliff, but mother has a tennis racket in her hand. She’s using it to shield her eyes from the sun as father points to a vista far distant – perhaps the 18th green – in this amusingly multi-sport advertisement for Mont Revard, in the southwest of France.

A true collector’s item! Shepard Fairey’s world-famous Obama portrait, first used for the “HOPE” poster, was picked up for this more direct 2008 campaign poster. However, in a printer’s error, a light green wash appears where the white should be. This is one of only 10 created before the error was identified, and the print run stopped. It’s printed on vinyl, with grommets at corners: presumably designed for campaign-rally purposes.

This is one of the first designs Turner created for the Monaco Grand Prix. In this particular year, England’s Graham Hill was the victor. It was also the Formula One race in which Japan debuted its Honda team.

On December 8, 1953, President Eisenhower announced, to the world, the threats and promises of the nuclear age. “My country’s purpose,” he said, “is to help us move out of the dark chamber of horrors into the light, to find a way by which the minds of men, the hopes of men, the souls of men everywhere, can move forward towards peace and happiness and well-being.” This was the “Atoms for Peace” speech, and an approach taken up by General Dynamics CEO John Jay Hopkins in 1955. General Dynamics built the first atom-powered submarines and many other products of the nuclear age. The company was understandably anxious to upgrade its image and emphasize peaceful applications of its capabilities, which is why it needed to make its existence known at the first Atomic Energy Conference in Geneva in 1955. With much of its work secret, an exhibit of actual hardware was out of the question; fortunately, General Dynamics found Erik Nitsche to express its achievements and goals in graphic terms. Each poster had “atoms for peace” printed in a different language to emphasize the universal nature of the sentiment and the campaign. Spanish is poetically ideal for this “solar dynamics” poster (the Costa del Sol, at the coast of light).

David Klein had an unrivaled ability to capture the soul of an American destination – its essence, its particular beauty – using little more than the bright flat colors and shapes of mid-century Modern style. This celebration of San Francisco and the Golden Gate Bridge is one of his finest works.

See more from our Klein Collection here.
All lots are available for viewing and bidding today!

CLICK HERE TO SEE MORE POSTERS WITH RESERVES UNDER $1K.

Poster Art of the Winter Olympics