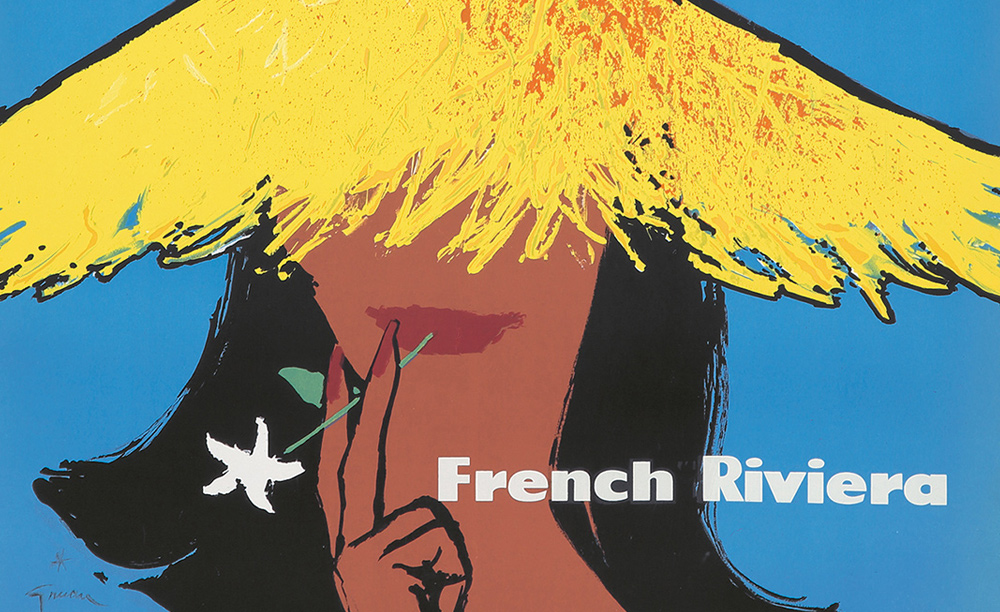 Don’t be misled by all of the big ticket items at auction—you, too, can own a great vintage poster without dipping into your children’s college funds. Our Creative Director, Jim McCobb, has selected ten fantastic posters from our February auction with reserves under $1,000.

Rare Posters Auction 77 will be held at Rennert’s Gallery on February 24 at 11am EST. All posters are on view February 8 through the 23rd.

Curated and organized by Keith Haring, Rain Dance was a benefit for UNICEF’s African Emergency Relief Fund: Pop Art’s contribution to pop music’s Live Aid that same year. This poster—now considered to be an iconic piece of the Pop era—stemmed out of Warhol’s system of collaborating upon the same canvas with a variety of his protégées. Here, he joins forces with Lichtenstein, Haring, Basquiat, and Yoko Ono to create a unified, exciting composition. “This poster reflects the créme de la créme of New York’s artistic and social circles in 1985. Water, so essential to combat drought and famine prevailing in Ethiopia, was the poster’s principal message and its theme, rain, is treated from different perspectives by each of the artists: graphic (Lichtenstein’s oblique lines), practical (Warhol’s umbrellas), ethnographic (the rain dance by Haring), political (Basquiat, combining the homophones rain and reign), and geographic (Ono, whose footsteps illustrate Africans’ long walks to reach rare water sources)” (Warhol Posters, p. 116).

Jim’s note: You can own a Warhol, a Haring, a Lichtenstein, a Basquiat, and a Yoko Ono with a single purchase. What’s not to like?

One of Gruau’s most iconic designs, this poster uses just four elements: a Provençal straw hat, a plucked flower, the lips of a mysterious woman, and the limitless blue sky to evoke the easy pleasures of the French Riviera.

Jim’s note: This is a very popular image—it’s simple and effective. Take just one look at it and you’re on the Riviera. An iconic modern travel poster.

There are no gimmicks here—just high quality Swiss shoes in action, likely soaring high above the Alps. Fritz Hirzel proves his aptitude for highly detailed and expressive illustration here: the nuanced stitching on the shoe, the reflection of wintry sunlight on newly polished leather, and the ski’s perfectly poised springs create an illusion of reality—while the abstracted leg and arm are rendered gesturally, as if they’ve already fled the scene. Hirzel’s background was certainly impressive: he worked as a typeface painter, apprenticed as a window dresser, studied graphic art and painting at the School of Applied Arts in Basel, studied painting in Paris and Munich, and opened his own gallery, called simply Gallery 24, in St. Gallen. An impressive poster by an industrious artist.

Jim’s note: An ingenious design that captures the anticipation leading up to the first run of the day. I love the detail of the old school bindings and the Swiss cross featured on the striking red glove.

Displaying both power and beauty, this woman represents the Women Ordnance Workers—an integral part of the war effort wherein working class women left domestic service to assemble munitions in rural factories. This job was incredibly dangerous, as a minor mistake could lead to an explosion on the job or a misfire abroad. This is one of a series of posters published by the Ordnance Department of the United States Army.

Jim’s note: It might not be as famous as the iconic We Can Do It poster featuring Rosie the Riveter, but it’s just as successful in projecting the confidence and determination of its subject. Treidler’s composition expresses volumes: note how he combines the elegance of her posture with a clenched fist.

This straight-to-the-point advertisement highlights one of the exotic creatures in the Ringling Brothers’ “world’s biggest menagerie”—the polar bear. While most wild animals were often depicted as fierce and fearsome, this particular polar bear is given the sentimental treatment. “Polar bears are especially dangerous animals because their faces show no emotion, including no anger signaling attack. The Strobridge solution: Go the other direction, making carnivores cute, flashing anatomically impossible but pleasingly anthropomorphic smiles” (Strobridge, p. 33). Indeed, our gentle beast beckons adoration.

Jim’s note: A great and focused image without the histrionics of the typical circus poster.

Grover George (1887-1958), an Ohio native, began performing as a magician when he was only 10. He continued to perform at small theaters across the United States, then left with his company of 18 for a five-year tour of Central and South America. He returned to the States in 1929 flushed with success, and expected to storm the theaters of his own country. This spectacular poster is one of the designs created for that “triumphant American tour.” But that triumph was out of reach—the magician Howard Thurston was intent on maintaining his territory, and brought suits against George whenever he attempted to book a venue of any distinction. Although these suits were, in fact, frivolous, George did not have the necessary funds, and was relegated to playing second-rate stages. He returned to South America, making occasional minor trips back to the U.S., and died in São Paolo, Brazil, where he had retired. The uncredited artist pulls out all the stops to seduce the viewer with exotic and otherworldly affiliations: from demonic intervention to Oriental mysticism, the magician’s credentials are graphically laid out. Unfortunately, due to George’s legal woes, the poster may never have reached its intended audience.

Jim’s note: Sadly, this is the only one of the two magic posters in this sale. But it features everything you’d want in a magic poster: little red devils, a card trick, the Great Pyramids, oriental mysticism, and, of course, a dapper magician at the center of it all.

Procession. Attractions. Transvestites. What more could you want from an artists’ party? Fauvist artist Othon Friesz designed this ad for the 1923 edition of the annual Bal Aide Amicale Aux Artistes, or “friendly help to artists” event. A trio of costumed participants stand together in a wash of painterly gold light in what was sure to be a rambunctious event at Bullier.

Jim’s note: Art Deco Bal posters are both a typographer’s and graphic designer’s delight, and Friesz’s poster for the Bal Aide Amicale Aux Artistes does not disappoint. I’m especially fond of the painterly use of script with serif and sans serif fonts. Judging from the three ravers in the poster, we need to learn how to party like it’s 1923.

Subtle it isn’t. Then again, if anyone was looking for subtlety in advertising they surely wouldn’t have hired Grün. An altogether arresting design—humorous, seductive, and rather openly sapphic for a revue at La Cigale—seen here with text that announced its rather suggestive title: “‘Are you coming?’ ‘T’y viens-t-y?’ is ample proof that the Belle Epoque sauciness remained a preferred theme. A beauty—as always buxom and with an ample décolleté (a mere strap, possibly required by the censors, hides her nipple) is about to be led away by some kind of a disguised Pierrot. A chubby policeman (a transvestite?) who is trampling a passerby seems to enjoy the sight. The scene is complete with the Moulin de la Galette and an April moon in the background. Oh! Montmartre!” (Grün, p. 52).

Since “an army runs on its belly,” and “food will win the war,” this was one of many appeals to work the land on behalf of the effort to win World War I. This time, however, it’s a solicitation for the Y.W.C.A., created by the great illustrator Edward Penfield, depicting four clean-faced girls in uniform heading home after a day’s harvest.

Jim’s note: I love how Penfield combines the subdued color palette with the rugged appeal of the four girls—their bob haircuts signaling the post war liberation of women’s fashion.

Fireworks, brilliant lighting, and a happy wave from an official hostess greet us at the Fair’s opening ceremonies. An image befitting “the grandest illusion of the century” (Trylon, p. 39) that was The World of Tomorrow.

Jim’s note: This is my favorite World’s Fair poster: the inviting and immaculate hostess—her uniform as well designed as anything else on offer—is framed by the Trylon and Perisphere to create a scene of pure eye candy.

See more of our World's Fair Posters here.
All lots are available for viewing and bidding today!

CLICK HERE TO SEE MORE POSTERS WITH RESERVES UNDER $1K.

The Circus of Weird

You Oughta Be in Pictures.