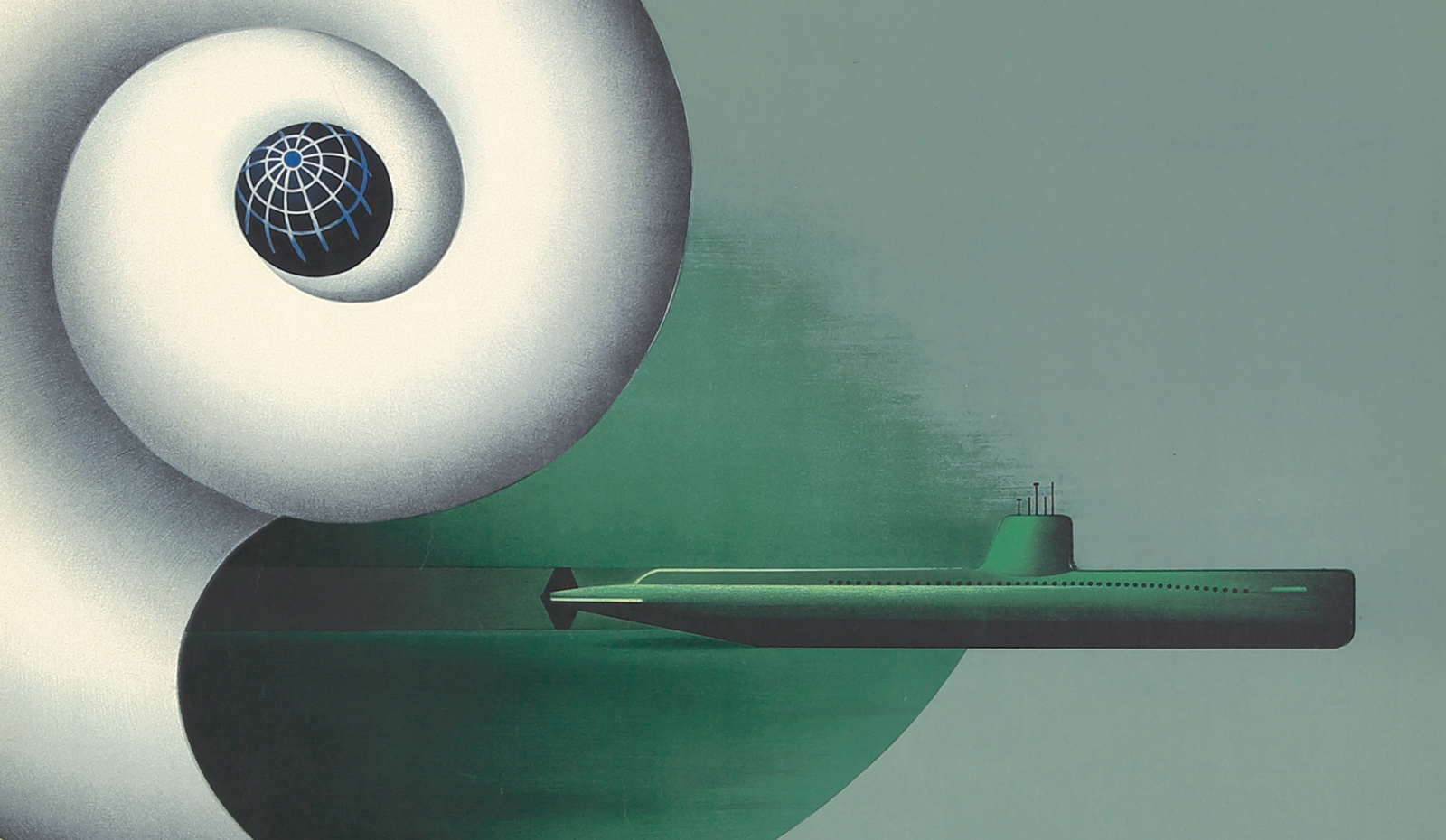 President Eisenhower knew that fear was a murderer. He was wise enough to recognize, in atomic energy, the birth of a new science. Savvy enough to understand: our technologies are tools, and can be used for good or ill. And we have a choice.

In December 1953 he delivered a speech, entitled “Atoms for Peace.” It was a good line. “My country wants to be constructive, not destructive,” he said.

Six months later, General Dynamics launched the USS Nautilus nuclear submarine, proving that a nuclear fission reactor could be used as an energy source. It was a revelation; even Pope Pius XII praised the development as a note of optimism.

In the Nautilus’s wake, General Dynamics took up the “Atoms for Peace” slogan as an overarching core value of the company. A major PR campaign began in 1955, with comprehensive addresses by General Dynamics’ CEO, John Jay Hopkins, and a global poster campaign created by the Swiss artist Erik Nitsche.

Nitsche’s work was an instant success. Each image is a fascinating, carefully thought-through work of advertising with multiple layers of meaning. Nitsche didn’t just deploy the most cutting-edge design standards of the midcentury period. He very cleverly paired each message with “Atoms for Peace” in a different language – from Cyrillic to Sanskrit to Italian and beyond – linking each nation’s challenges to solutions in advanced nuclear research.

For example: Astrodynamics (#404) addresses the emerging Space Race, in Russian, with the suggestion of nuclear-propelled spacecraft. (After some thought, setting off successive atmospheric nuclear blasts was deemed unsound strategy. Many years later, our Cassini probe traveled to the Saturn system powered by a plutonium reactor.)

Or his most famous – Hydrodynamics (#401) – in which the Nautilus sub emerges from a Nautilus shell above French type, in a homage both to Surrealism and to science-fiction pioneer Jules Verne, the author of 20,000 Leagues Underneath the Sea, featuring a submersible named Nautilus.

Or Solar Dynamics (#405), emphasizing the value of capturing and using the many frequencies of solar radiation across the entire electromagnetic spectrum – in Spanish, echoing the Costa del Sol – “on the coast of light.”

Today, Nitsche’s poster series is hailed for accomplishing one of the world’s first truly global advertising campaigns. Artistically brilliant as well as hugely influential, the campaign’s DNA can be found in IBM’s “Smarter Planet” initiative of 2008-2013; while the name inspired the band Atoms for Peace, composed of members of Radiohead, R.E.M., Red Hot Chili Peppers and more. Percussionist Marco Refosco said of the band, “It’s like a big Pandora’s Box, and I don’t know what direction it’s going to go in. We’ve got these bonkers rhythms made by machines, and musicians who can keep up with them – and the two can bounce off each other.” An apt description of “Atoms for Peace” as a grand concept, in fact.

These Aren’t Posters, but They Are Rare, Vintage, and Cool as Hell

“I’ve Come to Look for America”