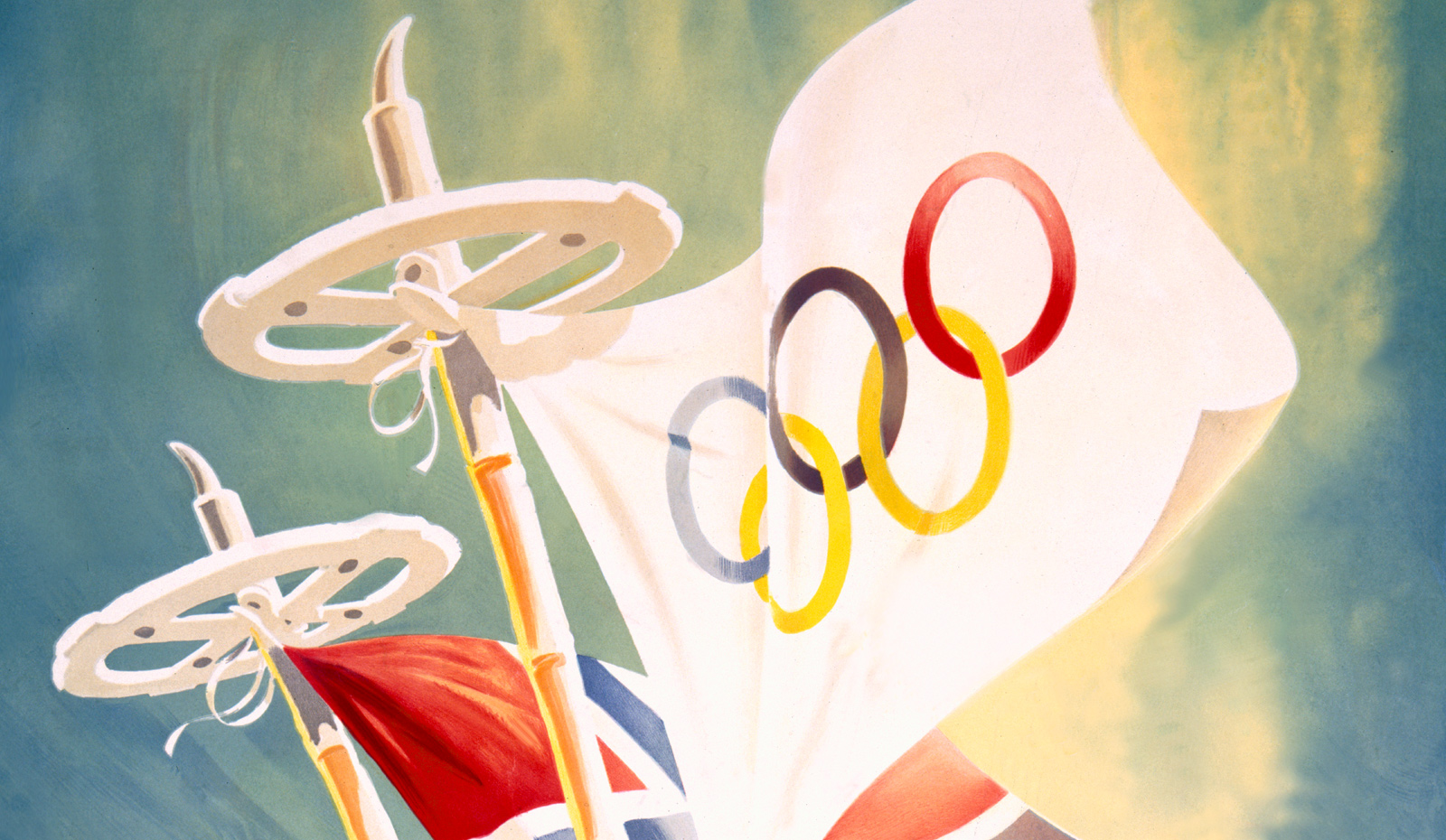 Since the ancients competed in the nude, and Mount Olympus proved foreboding, the idea of a Winter Olympics was a little late in coming: not until 1924, to be exact. The great sporting event needed promoting, of course – and one of the wonders of our 50,000-image Poster Archive is that we have a nearly complete record of all the Winter Olympics posters in history. Here is a selection:

Once it was decided that the first Olympic Winter Games would be held in Chamonix, the PLM railway awarded a subsidy to construct new facilities and went on to publish posters for four of them. The commission for the poster of the specially-built bobsled track went to prize-winning Salon painter August Matisse. His unusual solution grants us the bird’s view, as it looks down on a team as they whiz by. Although the eagle clutches the French tricolor, it was the Swiss team that won with a total time of 5 minutes, 45.54 seconds.

The 1928 Winter Olympics were the first true Winter olympics, not scheduled as an extension of the Summer Olympics. The weather responded in kind: the Opening Ceremonies were held in a blizzard; then the temperatures yo-yo’d, and one event was cancelled when the thermometer leapt up to 77 degrees F.

Laubi likely was chosen to create the official poster for the event on the basis of the image he created for the annual St. Moritz winter horse race in 1924 – so well-received it was used again the following year.

Thus began the legend of Lake Placid, NY, the celebrated home of the Winter Olympics in the U.S. Two men were largely responsible for the winning bid: Godfrey Dewey, head of the Lake Placid social club – and his brother, Melvil Dewey, inventor of the Dewey Decimal System.

Witold Gordon’s design, with its inspiring ski-jumper, is something of a cutting joke. The competition for the Winter Games was split between Big Pines, CA and Lake Placid, and in anticipation, Big Pines built the world’s largest ski jump. Lake Placid got the Games anyway. Gordon went on to exhibit artworks at the 1939 World’s Fair in New York. The Games were opened by Franklin D. Roosevelt, Governor of New York, who won the presidency nine months later.

Unseasonably warm weather seems to have afflicted the Winter Games from the very first. Bobsleigh races were actually held two weeks after the closing ceremonies because of warm weather – Eddie Eagan won gold, making him the only Olympian to medal in both Summer and Winter games.

Everyone knows about the 1936 Summer Olympics and the triumphs of Jesse Owens. Not many people know that the ’36 Winter Olympics were also held in Germany – the last year a single nation would host both Summer and Winter events.

Ludwig Hohlwein, the most celebrated graphic artist in Germany prior to World War II, was commissioned for this poster; he designed it in 1934, and its striking composition makes it one of the more memorable Olympic posters. A skier raises his arm in triumph, eyes closed, bathed in ecstasy and exhaustion, feeling the cool wind of serenity and the calm of a great task accomplished pass over him.

It was a fine subject: the ’36 Olympics were the first time Alpine skiing made an appearance, in the Combined event adding together results from the downhill and the giant slalom. Franz Pfnür and Christi Cranz were the gold medalists.

It has been 12 years. The world has been altered irrevocably. The Axis Powers are defeated: the Games begin again, this time, again in Switzerland, neutral territory during the war.

Germany and Japan were barred from participating. The Soviet Union, drained of resources, could not send any athletes. Even Norway had to borrow skis from the United States. The world was tired, out of money, with little time to organize. The theme of this Winter Games was “Renewal.”

Alois Carigiet, based in Zurich, was chosen for the poster design. He was strongly influenced by Expressionism; and then, in 1940, he embarked upon an Alpine children’s book with a Romansh author – wildly successful, and translated into 10 languages. Appropriately, his childlike, crayon-esque drawing hints that we are all children here in this new world: let us play some games.

The winter Games of 1952 were held in Oslo, where Yran won the competition of local artists to supply two posters for the return of the Games to the Nordic climes from whence they came. Yran’s choice was significant: at the Closing Ceremony, the Mayor of Oslo presented the IOC with this Olympic flag, called the Oslo flag, which is now preserved in a special display case, and is transferred from one host city to the next in ceremony.

The American Dick Button completed the first triple jump in figure-skating history, winning his second consecutive Olympic gold in the event, and locking himself into a figure-skating commentary position on television for many years to come.

The Olympics are all about the peaceful, sportsmanlike competition between nations in the race for excellence. The cities chosen to host, often bear political significance, some sign of this compact between nations being broken. During World War I, Cortina was caught on the border between empires – occupied by Austrian troops for years, until ceded to Italy.

At the end of World War I, the town was renamed “Cortina d’Ampezzo” (Curtain of the Ampezzo Valley) and in this poster, Rondinelli has placed, front and center, the classic image of Cortina: the curtain of the Dolomites, and Cortina’s campanile fronting them. This was the first Winter Olympics to be broadcast on TV to an international audience, and the beauty of this Italian ski town, now introduced to all the world, led to great fame: star turns in the films “The Pink Panther” (1963), the James Bond 007 film “For Your Eyes Only” (1981) and “Cliffhanger” (1993).

A map was necessary to identify the location of the VIIIth Winter Olympics, since just four years previous, Squaw Valley, near Lake Tahoe, consisted of one chairlift, two rope tows, and a 50-room Lodge. Shocked at the underdevelopment, the IOC threatened to move the competition back to Innsbruck. So that’s how Squaw Valley got an $80 million facelift.

The stark monochrome of Jaruska’s winning design – expressing the hardness of ice and the fragility of the individual snowflake – seems a response to the modernity and the sorrow of the 1964 Olympic moment.

In 1961, the entire U.S. figure-skating team – 18 athletes all training for Innsbruck ’64, as well as their coaches and families – perished in the crash of Sabena Flight 548, as they were traveling to compete in the World Figure Skating Championships in Prague. Australian Ross Milne and British luge slider Kazimierz Kay-Skrzypeski also died in training, in separate incidents. The assassination of JFK also loomed over the event.

Once again, lack of snow threatened the competition; the Austrian army carved out 20,000 ice bricks from a mountaintop and brought them down to the bobsled runs; they brought 40,000 cubic meters of snow to the ski courses. The opening ceremony featured Beethoven’s 7th, performed by the Vienna Philharmonic, raising spirits immediately.

Lidia Skobikova won all the women’s speed-skating events; Klavdiya Boyarskikh of the USSR won three golds in cross-country skiing; and Italian bobsleigh pilot Eugenio Monti loaned the British team an axle bolt that had gone missing, costing him the gold but earning him the first-ever medal for sportsmanship.

A graphic artist and photographer, Rolet created an ingenious design via photomontage, seizing upon the kernel of Rondinelli’s art above, but driving it to creative extremes. He pictured Grenoble’s main thoroughfare, and the surrounding mountains, as a flaming Olympic torch.

Between 1968 and 1972, the Universe changed: men walked on the Moon. For the first time, we earthbound misfits could watch film of astronauts, and the everyday objects they held, spinning effortlessly in Zero-G.

This was the first Winter Olympics outside the West, and that brought its own sense of freedom and weightlessness. Yusaku Kamekura, a pioneer in modern Japanese design alongside Tadanori Yokoo, seized upon the fusion of Japanese minimalism and the snapshot strangeness of New Wave film, and created one of the most conceptually perfect Olympic posters ever. Japanese figure-skater Takayuki Ogawa is photographed from above, seemingly tumbling upward and out of the frame like a spacecraft in “2001: A Space Odyssey.” The spiral scrapes on the ice are like chalk-marks of mathematical formulae on a blackboard, abstracting to a face in space: a smiling one at that. Ogawa’s shadow resembles the silhouette of a long-limbed crane.

Japan had never before won a gold medal at the Winter Olympics. Fittingly, the nation swept the ski-jumping event: a contest to see who can remain weightless the longest.

Back to Innsbruck. This is not the official poster, which was designed by Arthur Zelge, an Innsbruck native. Instead, we’ve chosen the far superior effort by Franciszek Winiarski, a Pole whose aesthetic is right in the chute with the great Polish renaissance in graphic arts that occurred during the late ’60s into the mid-’70s.

On the year of America’s bicentennial, Dorothy Hamill won the gold in figure skating, creating an instant vogue for her “wedge” haircut; while Winiarski’s intuition proved correct, with Franz Klammer destroying the downhill course and setting the Austrian world standard for downhill skiing for the next two decades, if not more.

The American fervor for women’s ice-skating, and the emotion of the team’s resurgence from the tragedy of 1961, prompted this print, on silver metallic paper, of a figure skater in the ecstasy of motion.

A classic Andy Warhol captures the precise feeling and texture of pop life in 1984, and the televisual experience of the Olympics in the Age of MTV. It was an incredible moment: the first Winter Olympics in a Socialist country, in the city that sparked World War I, and there was a palpable sense of possibility and excitement in the air.

The East German women rebounded from their speed-skating humiliation of Olympics past, and won 9 out of 12 medals in the sport. American brothers Phil and Steve Mahre won gold and silver in the Slalom. Scott Hamilton and Katerina Witt became global stars on the ice.

But nothing could match the impossible, astonishing, utter beauty of Britons Torvill & Dean, swirling Ravel’s “Bolero” into the passion-dance of death from which the world never recovered. Their perfect score for artistic impression has never been matched.

Eight years later, Sarajevo would fall under seige, the crucible of the Serbian-Croatian War following the collapse of the Soviet empire. The siege lasted four years. Fourteen thousand people died.

This Warhol is as good as anything at capturing the speed, dynamics, precision and elation of a ski-jumper. Originally printed in 1979, this image was re-used for the Calgary Olympics of 1988 – doubling as a memorial for Andy Warhol, who died in 1987.

The great irony, which Warhol would surely appreciate, is that the breakout stars of the Calgary Olympics were anything but the ideals of physical mastery described in this poster: the comedic, triumphant failures of British ski-jumper Eddie “The Eagle” Edwards, and the improbable run of the Jamaican Bobsled Team.

The calm before the storm, where serenity reigns in the moments before the explosion of physics and athleticism, ice and powder. All of this is summed up to beautiful effect in this photomontage design for the 1998 Nagano Winter Games, with a wood thrush perched atop a pair of ski poles.

Nagano would indeed prove explosive – Austria’s Hermann Meier survived a fall in the downhill, and came back to win golds in Giant Slalom and the Super-G. French figure-skater Surya Bonaly did a flip and came down on a single skate, bringing the house down; Tara Lipinski, at just 15 years old, narrowly beat favorite Michelle Kwan.

A snowboarder pivots during the parallel giant slalom, events won by Canada and The Netherlands; it was Shaun White, on the half-pipe, who elicited the awestruck gawps.