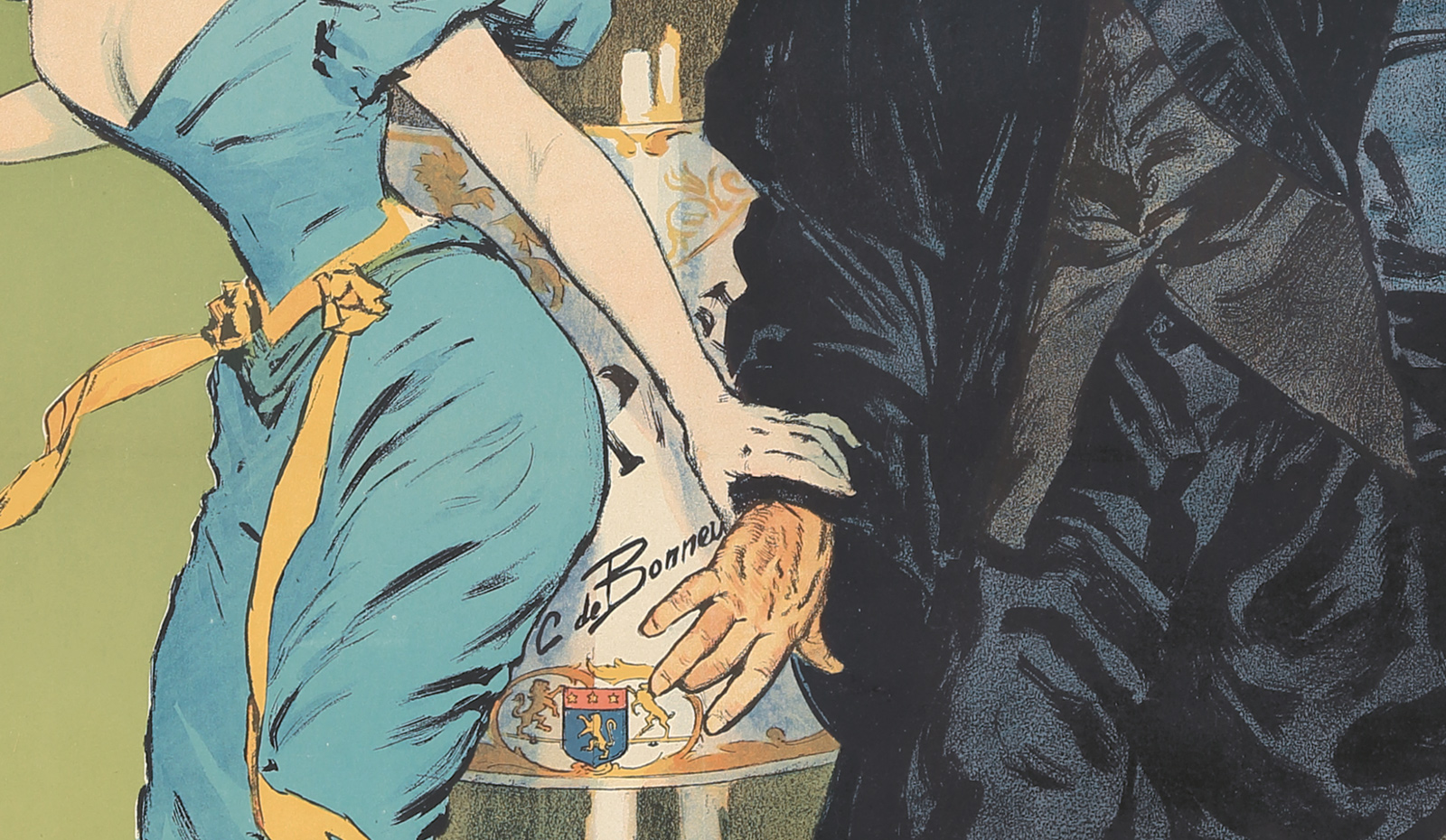 It’s clear that contemporary life is in upheaval. Attitudes with regard to race, gender, and sexuality are in the midst of an intense argument and reformulation. Our poster collections, this Winter 2018, reflect many of these jostlings and reorganizations.

Art isn’t supposed to play nice. Advertising, on the other hand, is designed to reach into your heart and manipulate you toward what you want. What happens when posters – at the quavering border between advertising and art – expose our deepest prejudices? What happens when the object of the advertising ceases to exist? Or circumstances have changed utterly? Is it a greater work of art? Or is it merely a signifier of injustice and exploitation?

These are difficult subjects.

1897 was peak Gilded Age – the last period of American history with economic inequality at eye-watering extremes. The circus, like any other entertainment, succeeded by converting stressful aspects of social existence into light comedy. Under its Big Top, the Barnum & Bailey Circus created a dizzying and awe-inspiring face-off between the Haves and the Have-Nots in the most specific, Noo-Yawkian way: Fifth Avenue vs. Paradise Alley (the heart of Five Points). A hardscrabble working-class Irish gal, atop a rough nag (a sign around the horse’s neck reads, “My chest is week” [sic]) opposes the belle of Manhattan gentry, all silk and lace, standing upon a charging white Arabian stallion. In reality, they’re Josie Ashton and Rose Wentworth, two of the greatest equestriennes in show business.

A fleet of zeppelins dropping bombs upon London: it’s not a normal advertising strategy for a circus. But in 1918, nothing was normal. Before the war, the Sarrasani Circus blended traditional circus attractions with spectacular new technologies – cars, planes, and film projections. But when war broke out, Hans Stosch-Sarrasani saw the international circuit of circus performers collapse, and with it, the mechanics of his own business. Many of his own employees had to flee the country. Sarrasani grew furious, and adapted his entire Circus into a live-action, German militaristic propaganda show. Incredibly enough, his “arena war play” Europa in Flammen was too inflammatory for even the German military censors. Only toward the final collapse, between June and September 1918, was he able to perform Torpedo – los!, which featured submarine warfare, the explosion of a shipyard, and the bombing of London with zeppelins. (That was wishful thinking; by 1916 the British had invented incendiary bullets that would ignite the zeppelins’ hydrogen.) It continued to be one of the most presigious German circuses between 1918 and 1945. In 1945, the Dresden circus was completely destroyed by Allied firebombing.

Whatever shall we make of this? Here’s a very rare poster for “Les Frères Loïe Fuller,” a vaudeville parody of Loïe Fuller’s revolutionary light-dance, with three men as Loïe stand-ins. The matron holding the light at left, and the soldier at right, are outraged – shouldn’t we be as well? Fuller was frustrated, throughout her career, about other performers stealing her act. The courts wouldn’t allow her to copyright her routines (though she was able to patent the technologies she used to create her optical effects). What might she have thought, had she known that men were now exploiting the art she perfected, and was so protective toward?

An old lecher, and a nubile young lady deftly parrying his wandering hand? We know too much about the sexual dynamics of 19th-century France to deny the prima-facie here. However, French observers of this advertisement would also recognize the character Diafoirus, from Moliere’s 1673 comedy “Le Malade Imaginaire.” For centuries, Diafoirus was used stock character similar to Pierrot and Columbina of the Commedia dell’Arte.

But Diafoirus was no spurned lover. He was a charlatan, a quack, and a snake-oil salesman: frequently appearing in French ads and cartoons to represent a foolish endorsement of a particular product. Here, an alluring Green Fairy, holding quite a snifter of the wormwood juice, leans against a full bottle of the stuff, staying Diafoirus’s hand, as if to say: “We don’t need your help, dear. Let them try it for themselves.” The sentiment is emphasized by the caption at bottom, “So drink and you’ll see afterwards.” And yet, even if we erase all of the sexual undertones, we’re left with an advertisement that uses quackery to deny quackery – for an alcoholic drink that, far from having medical uses, was accused of driving people mad.

European advertisements of the late 19th / early 20th centuries that featured black people offered a set of stereotypes that ran the gamut – from a whimsical portrayal of difference to rather vicious (to us, today) racist puns. This poster for Excelsior tires plays on the (somewhat grudging) admiration, and pity, white people felt for a particular “type” of black person, who “cheerfully” bears the toughest loads.

Indeed, it’s hard not to like this raffish, stogie-smoking gent, who’s barreling over a shredded landscape of thorns, broken bottles and ripped tin cans, on a seemingly ad-hoc unicycle rimmed with an Excelsior tire. More caustic ads use the same trope, but comment more explicitly – for example, an ad for motor oil, with a black figure saying “Like me, it works in all weathers.”

This poster is a mystery. We have a handful of records of one Morris Abrahams as a theater manager in London during the 1860s. His name appears on at least one playbill featuring a lecture devoted to a progressive cause. It’s possible, however unlikely, that he later traveled to the U.S. in the 1880s or 1890s (the likely origin date of this poster) to deliver lectures on perceptions of Jews in modern society. This interpretation gains substance since we know that Judson M.W. Jones, the printer, specialized in theatrical posters in Chicago from 1867 to 1905. We cannot, however, identify a coherent historical narrative of this object, and our inability to determine whether this poster is anti- or philo-Semitic renders it an enigma of history.

In this early Soviet poster, a kinky-haired genie is happy to introduce a chicory and chocolate-flavored coffee concoction (apparently, for a Caucasian lady on the package, who can be seen drinking it). Kakao was produced by The Mercury Factory at 10 Solyanikovski Lane, Kharkiv.

Awe-inspiring and chilling at once, this supremely atmospheric ad for zeppelin service to New York City is straight out of Alfred Stieglitz’s aesthetic – excepting the swastikas on the airship’s tailfins. Like “The Man in the High Castle,” it’s a tense double-portrait of “what could have been,” both technologically and geopolitically, and possesses both beauty and horror in a single frame.

A remarkably beautiful piece of propaganda, this poster celebrates 100 years of agricultural expansion in Algeria. France invaded the African nation, and began colonizing it, in 1830. Algeria is one of the hottest countries in the world; deserts constitute more than 80% of its land area – so the development of the nation’s agriculture was no mean feat. The rest of the colonial project, however, was precisely a mean feat: French and Algerians lived apart, with the colonizers enjoying social and political privileges not extended to native Algerians. Ethnic resentment led to civil war and Algeria’s independence in the mid-20th century.

Beginning with the 1890s bicycle craze, and continuing with the wide adoption of the automobile, global demand for rubber was accelerating relentlessly by the 1920s. While the most important source for rubber continued to be Brazil, rubber plantations were established in the Belgian Congo, run by a joint Anglo-Belgian enterprise, to supply European markets. That accounts for this British-printed, English-language poster for Europe’s largest commercial fair for rubber goods, held in Brussels. The image is a triumph of corporate propaganda: servants appear to be presenting the African with the fruits of his labor. In reality, the Congolese suffered a colonial regime of breathtaking cruelty.

Some comedians have figured out that the only way to avoid insulting someone is to insult everyone. Abadie brand rolling papers, manufactured in France from 1840, were known for their distinctive pink packaging. Ogé seizes upon the controversy of distinctive color, and sets up racist grotesques of the “red man,” the “white man,” the “black man,” and the “yellow man”, all equal in their preference for Abadies.

Ten Top Posters with Reserves Under $1,000

“I’ve Come to Look for America”