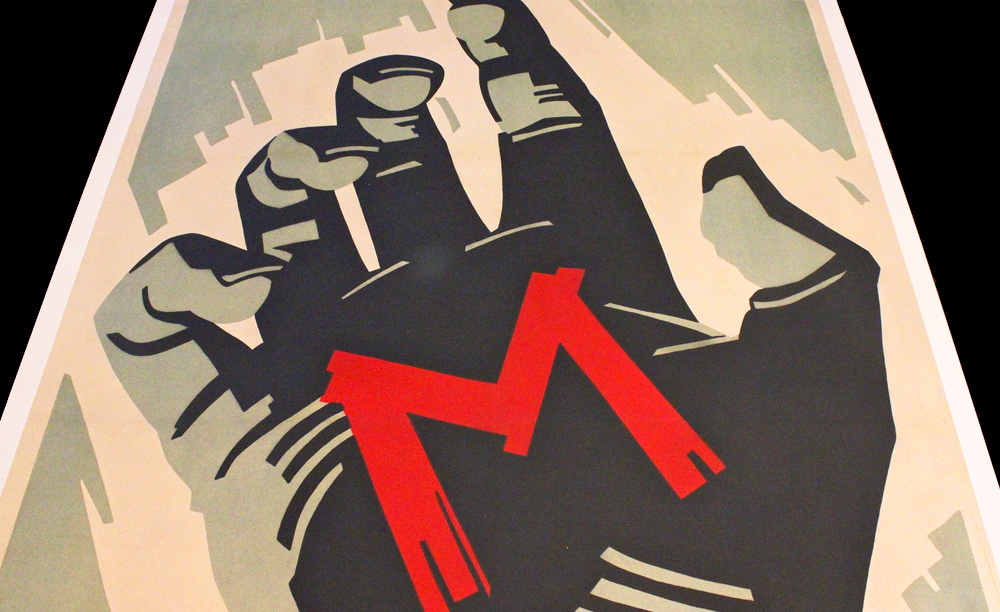 “M was my first film with sound. At that time you could count the number of sound films available for viewing on the fingers of one hand. Naturally I attempted to come to terms with this new medium: sound. I found, for example, that when I was sitting alone in a sidewalk cafe, of course I heard the noises from the street, but that when I was immersed in an interesting conversation with a companion, or when I was reading a newspaper that totally captured my interest, my organs of hearing no longer registered these noises. Hence: the justification to represent on film such a conversation without laying down the aforementioned street noises as background to the dialogue.”

The only other copy of this poster known to exist in North America currently resides at the Motion Picture Academy of Arts and Sciences. It’s the lesser-known, but far more artistically accomplished, two-sheet banner for the 1931 premiere of “M,” which Fritz Lang considered his greatest film. You can see it, in black-and-white, in the first frames of the film:

Lang’s first film in sound uses the new medium sparingly: silences are forboding; ambient city noises are lonely and ominous; a whistled refrain of “Hall of the Mountain King” has an initial whimsy, then an increasing malevolence.

The image both defamiliarizes and foreshadows the film’s climax, as a beggar scrawls M (for “murderer”) on his hand with chalk, in a ruse to ID the criminal. One of the great icons created in the final years of the Weimar Republic, this image was part of the “Haunted Screens” exhibition 2015-2016 at the Los Angeles County Museum of Art and the Milwaukee Art Museum.

“The God of Chance”: this absolutely adorable maquette only approximates the beauty of Gaby Deslys, a lost starlet of silent films and the dance-hall circuit. Born in 1881 in Marseilles, she was fantastically popular by the 1910s, performing on Broadway, dancing alongside Al Jolson, and earning the absurd sum of $4,000 a week.

She had an affair with King Manuel II of Portugal, caused a riot at Yale, and owned a villa on Marseilles’ Corniche. “Le Dieu du Hasard” was her last film. She died in 1920, before it was released, from complications from the Spanish Flu. “Le Dieu du Hasard,” as with all of her other films, is presumed to be lost, making this signed watercolor and crayon maquette – presumably for the film poster – an astonishing rarity.

A splendid, alluring, cosmopolitan reminder of the early Weimar period, this poster announces the 1920 grand opening of the Central Palace Cinema, now sadly gone from Mariahilferstrasse, Vienna. The swashbuckling redhead, looking like Isadora Duncan’s Peter Pan while wearing the hat of Captain Cook, promises “only first-class programs” and “outstanding music.”

Three of Hollywood’s most bankable stars, Clark Gable, Myrna Loy, and Spencer Tracy, come together under the careening portrait of an experimental plane for a tense drama of love, loyalty, ambition, and risk at the cusp of World War II.

This is the poster for the Dutch release of the film on Friday, February 17, 1939. Director Victor Fleming was able to procure the use of a new Boeing Y1B-17, which ushered in the B-17 Flying Fortress (see No. 40). A real-life test pilot accomplished the flying sequences and today it’s considered an important aviation film for its authenticity.

This beautiful, minimal poster is for the Polish release of “Moscow, My Love,” a 1974 Soviet-Japanese romantic drama about Yuriko, a promising ballet dancer. She’s invited to study ballet at the Bolshoi, falls in love, wins a dance competition, and then begins dying from a diagnosis of blood cancer. Yuriko was born in Hiroshima not long after the bomb. In what might – or might not – be coincidence, the ballet dancer’s yellow and blue tights match, almost exactly, with the blue-and-yellow shoes in Villemot’s 1973 “Bally: 2 Nudes” (No. 397).

Hats off to Art Deco!