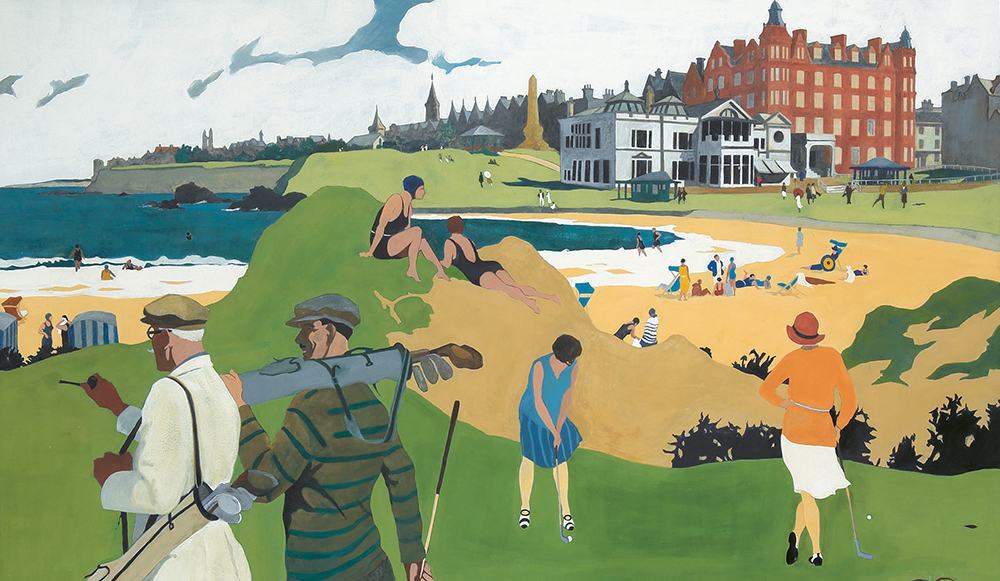 They might not be posters, but they are terrific works by poster artists that help inform their overall practices. Maquettes, paintings, and drawings can aid in planning a poster design or help to flex the creative muscle—and they give viewers valuable insight into the designer’s process.

All unique works seen here are in our 79th Rare Posters Auction.

Offset against a fleet of stylized horse heads, this bold Art Deco image advertises an unknown brand of automobile.

This non-poster lot includes a brass relief sculpture of the Normandie atop a marble pedestal and a magnificent silver medal by Jean Vernon, which includes a Deco embellishment on one side and the ship on the back. (2)

“Paths of Glory” was a black and white Soviet film starring Olesya Ivanova as Sasha Voronkova. Her story is based on the actual life of female engineer Elena Miroonovna Chukhniuk. She was born in 1917 to a peasant family, and at 21, she enrolled in courses to become an assistant locomotive driver at the Gomel Depot of the Belarusian Railway. She became a steam locomotive engineer, and drove military trains to the front lines in World War II. In all, she received many national awards for her work, and remains to this day the only female steam engine driver in the history of the Gomel Depot. Zelensky’s maquette poses the young ingénue in a striking pose, and this defiant image would become the film’s promotional poster.

In the early hours of January 1, 1959, the Cuban dictator Fulgencio Batista fled to the Dominican Republic as Fidel Castro’s rebel army took power of Cuba. Eladio Rivadulla responded to the news quickly: he retrieved a 1957 archival photograph of Castro from the New York Times and used it as his reference for this maquette. This same photograph was featured on the first page of Havana’s newspaper, El Mundo, on this day. His maquette would then become the first poster of Cuba’s new revolutionary chapter (see following lot). But Rivadulla never exhibited this original drawing—and, in fact, nobody even knew that it existed until Rivadulla’s children recently discovered the work bound in a scroll at their father’s home.

Chéret imagines an idyllic garden scene in impressionistic brush strokes. The musicians appear as if they may float away at any moment, but surely the sweet sounds of their tambourine and lute will linger in the air.

Four beautiful women flaunt their finest headpieces against a sea of sage green in this sensitive pastel drawing by Chéret. This was created just one year before the prolific artist produced his last poster.

For the fountain pen company, Colin serves up oceanic blue and stylized text reminiscent of watercolor paint, and even adds an aquatic pun below: “at visible ink level.” The official poster was not printed until 1937.

Arlequin was a magical comedy “in three acts and two dreams” written and directed by M. Maurice Magre, staged and costumed by Domergue, and performed at the Apollo Theatre in Paris. In a twist on the commedia dell’arte tradition, Arlequin is the anti-hero—he betrays the once virtuous village girl Michaela, thus dooming her to a life of shame. While plot reviews are mixed, there is one thing critics agree on: the sets and costumes, all by Domergue, were magnificent, as may be gleaned by this maquette. In 1921, Comœdia Illustré featured a spread of Domergue’s designs accompanied by plot points, and wrote, “All this enchantment is realized by the prestigious palette of Domergue, whose sets and costumes are pure fantasy marvels and which add infinitely to the penetrating grace of the poem” (Comœdia Illustré no. 6, 1921). A finalized version of this design also appeared in the magazine Fantasio, and a poster for the performance was also created (see PAI-XVII, 250).

“… possibly the most famous place in Scotland, and certainly for sports fans. St. Andrews is world famous for its golf: indeed, it is the home of golf, with the Royal and Ancient (Golf Club) dominating this part of the country. The ancient university City of St. Andrews lies at the extreme end of the Fife peninsula, where the North Sea washes a rocky headland flanked by sandy bays housing the most famous golf course in the world” (Furness, p. 56-57). In Gawthorn’s lush maquette, stylish male and female golfers take to the green; bathers tan on the rocky outcrops; and, in the distance, the university towers majestically. For another spectacular St. Andrews image, see Higgins, no. 350.

A sensitive study of a woman seated in a cafe—her attention rapt by someone just outside the frame—shows Steinlen’s painterly capabilities.

Summer, 1895: Lautrec and fellow artist Maurice Guibert are on board the steamer Le Chili, en route along the Atlantic coast from Le Havre to Bordeaux. Lautrec cannot keep his eyes off the young woman berthed in cabin No. 54. She’s meeting her husband in Senegal. Lautrec, suddenly obsessed, ignoring pleas from Guibert, refuses to get off the boat at Bordeaux. Finally, he is persuaded off the boat at Lisbon. But not before he’s captured a photograph of the unknown woman, which he turned into a lithograph of the exact same pose, “exquisite both in its execution and in the remoteness of the subject’s personality” (Wagner, p. 31): ideal for the Salon des Cent, with its running themes of meditation, admiration, and preoccupation. This is the rarest state of his design: one of 50 impressions, before letters, hand-signed, and numbered.

View all works by Toulouse-Lautrec.
View All Posters Available October 27
Live auction begins October 27, 2019 at 11am EDT
Join us in person, register to bid online, or bid by phone or absentee.
It’s better with a book.
Order the full Rare Posters catalogue now
for full details on all 530 lots
ORDER CATALOGUE
For orders to be shipped outside the US please click here.