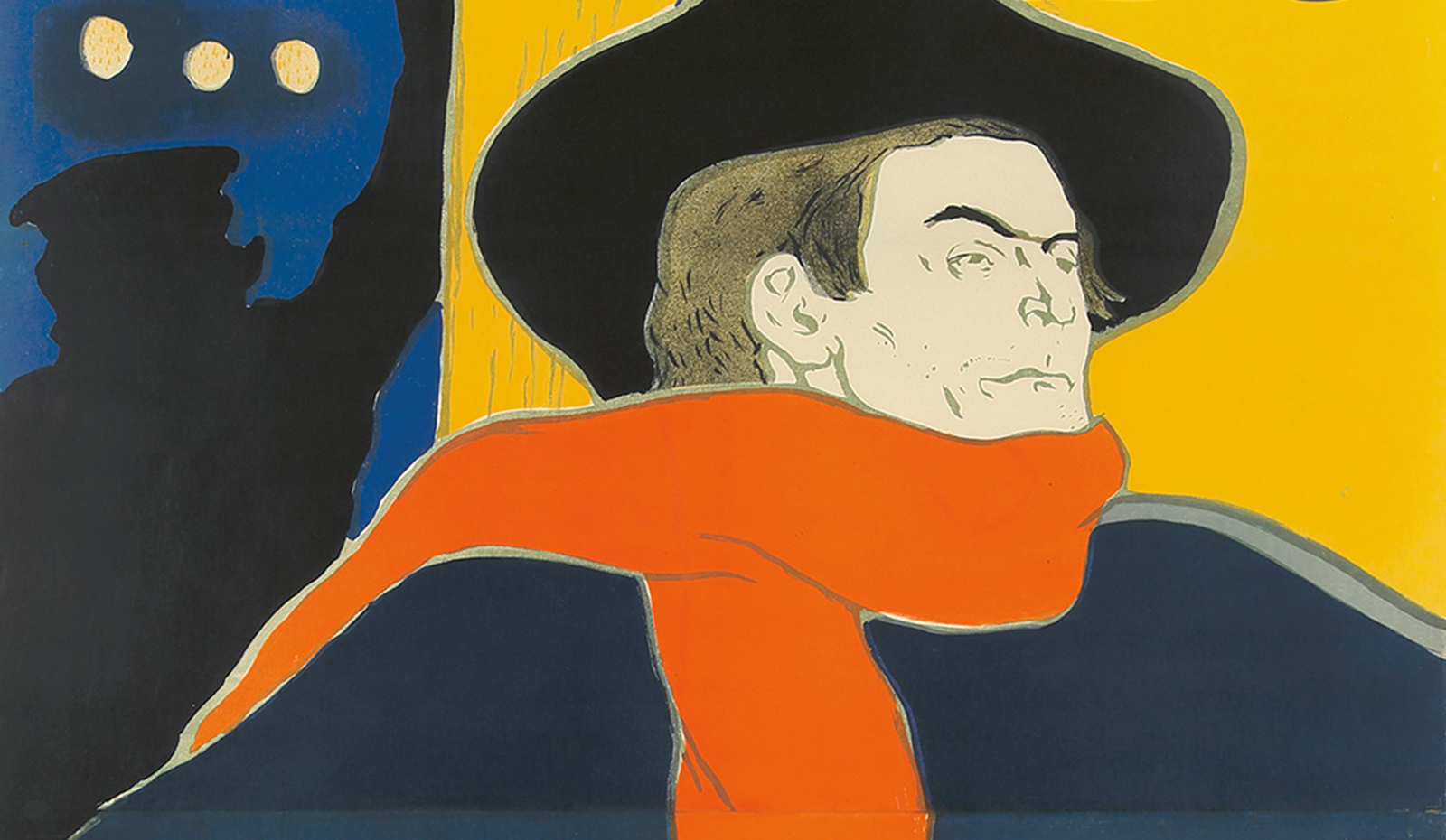 Le Chat Noir [was] where Henri had discovered a stocky, handsome, foul-mouthed character, a master of the chanson-réaliste by the name of Aristide Bruant. Henri sat happily through Bruant’s act night after night after night, listening to gritty ballads that ignored the idealised world of brightly-lit dance halls and sun-dappled boating parties so beloved of Henri’s colleagues. Bruant’s lyrics dragged his listeners down the seedy back-streets and into the scruffy hovels of the Butte, places Henri had glimpsed in passing but never dared explore.”

Louis Armand Aristide Bruand was born in the village of Courtenay, Loiret in France in 1851. After the tragic death of his father, the fifteen year-old Bruant moved to Paris in 1866 seeking work. He found his way to Montmartre, where he mingled with the working class in the local bistros, becoming a part of the cultural and political fabric of the neighborhood.

Using the stage name Aristide Bruant, he began performing music and comedy acts at café-concerts, and was soon signed to perform at the infamous Chat Noir. It was then that Henri de Toulouse-Lautrec began frequenting the same cafés and cabarets, and the two quickly became friends. Naturally, the performer needed to advertise his events, and Toulouse-Lautrec provided the perfect vehicle with his posters. Bruant’s signature look—a red shirt, black cape, high boots, long red scarf, and black hat—was the perfect fodder for Lautrec’s images of him. Whether performing at the Ambassadeurs, the Eldorado, or at his own venue, Le Mirliton, Lautrec capitalized on Bruant’s solemn facial expressions and his classic get-up. 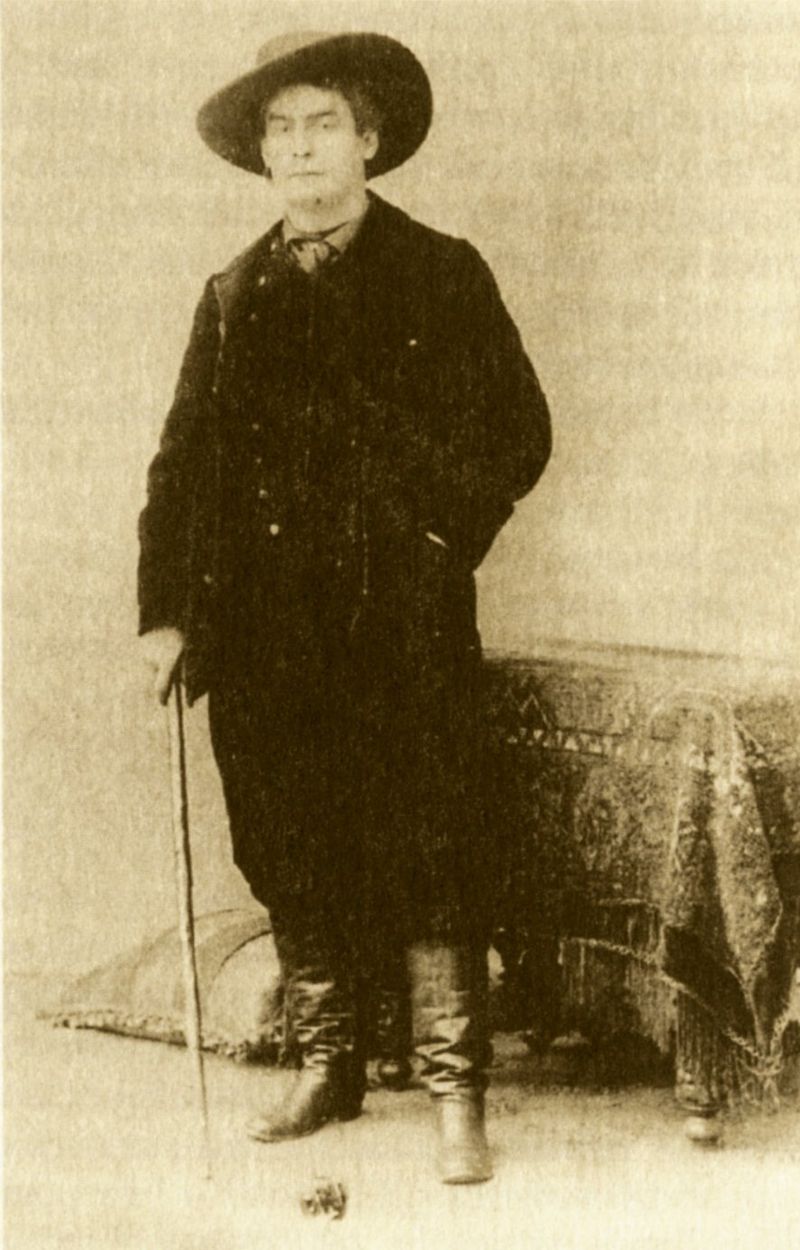 Bruant’s creative career hinged on his working class background and his rough-and-tumble man of the streets personality. This attracted audiences not only at the cafés he frequented as a teenager, but at the bourgeois venues on the Champs-Élysées as well, where the upper class could indulge in the grittier aspects of Paris. Lautrec’s rough representation of him only added to this aura—and in return, these posters boosted Lautrec’s own career.

This relationship of symbiosis has also immortalized the performer, whose image is best seen and represented in Lautrec’s posters of him. The posters below are included in our 87th Rare Posters Auction on July 12.

“The Montmartre chansonnier turned restaurateur, Aristide Bruant, was a strong, imposing personality, and in the several posters of him Toulouse-Lautrec conveys this by letting him dominate the picture completely, with virtually nothing else to distract our attention, and with Bruant’s characteristic red scarf, hat, and walking stick adding impact to the image… This design was seen by Bruant as a masterpiece, but the manager of the Ambassadeurs rejected it as too brutally frank and unflattering; the only way the performer could get it accepted was by warning the manager that he would not appear on stage unless there was a copy on either side of the proscenium, and unless the whole of Paris was plastered with further copies” (Wine Spectator, 46). The same image would be recycled by Lautrec two years later when Bruant appeared at the Eldorado (see following lot).

Despite the fairly discouraging reactions to his first artistic attempt at publicizing Aristide Bruant, Lautrec also designed this poster, at Bruant’s request, for his appearances at the Eldorado on the Boulevard de Strasbourg. He used new stones for the drawing, with the same dimensions and the same color arrangement as the design for his Ambassadeurs poster two years prior, but reversed. Strategically, this was a brilliant move, as the Ambassadeurs poster was already well known to the public. However, the management of the Eldorado was hardly more amenable, as we see from a letter by Lautrec which may refer to the Eldorado poster: “Bruant, my good friend. Enclosed the states as requested. As far as the poster ex condition is concerned, there are no good impressions left. The Eldorado management was very mean, haggling over the price and giving me less than the printing costs at Chaix. So I have worked at cost price. I am sorry they misused our good relations to exploit me. It remains to be hoped we will be more careful next time” (Adriani, p. 23). That said, once the poster was printed and hung it became “one of the undisputed masterpieces which adorned the billboards of Paris. Such an impressive combination of form and color, of picture and lettering, has probably never been achieved since. Just as the red scarf and the wide-brimmed hat were Bruant’s trademark, so too this poster epitomize[d] Montmartre and its cabarets in the heyday” (Schardt, p. 176).

In this version of the Aristide Bruant poster, the sale of a songbook by Bruant, illustrated by Steinlen, is promoted. This is a rare version of the image with the addition of red on the collar and sleeve.

This is the rarest image of all the Aristide Bruant lithographs created by Toulouse-Lautrec. According to Adhemar, this is the “third state” of use of Lautrec’s iconic portrait of Bruant, first created in 1893. Bruant used the image, in all its brutal and disdainful beauty, to advertise a bimonthly songbook called “Les Chansonniers de Montmartre,” a veritable encyclopedia of Montmartre’s performers, led by Bruant himself. As with the first state, it is also printed by Verneau (other states having been the work of Ancourt). “Unlike most members of bohemian Montmartre,” writes Michael L. Wilson in the Journal of Western Society for French History, Vol. 36, 2008, “Bruant had a limited education and direct experience of downward mobility, manual labor, and poverty… Bruant recounted that, as his family moved from one working-class neighborhood to another, he learned the strengths and poetry of working-class speech: ‘colorful, animated, brutal, cynical, but rich in picturesque metaphors, in bold neologisms, and in imitative harmonies.’ Bruant recalls being so seduced by this slang that he would wander the streets of working-class neighborhoods, speaking with and learning from everyone he met.”

View All Toulouse-Lautrec Posters
Or… browse all the lots online here
Live auction begins July 12 at 11am EDT
Register to bid online and in person, or bid by phone or absentee.
It’s better with a book.
ORDER THE CATALOGUE