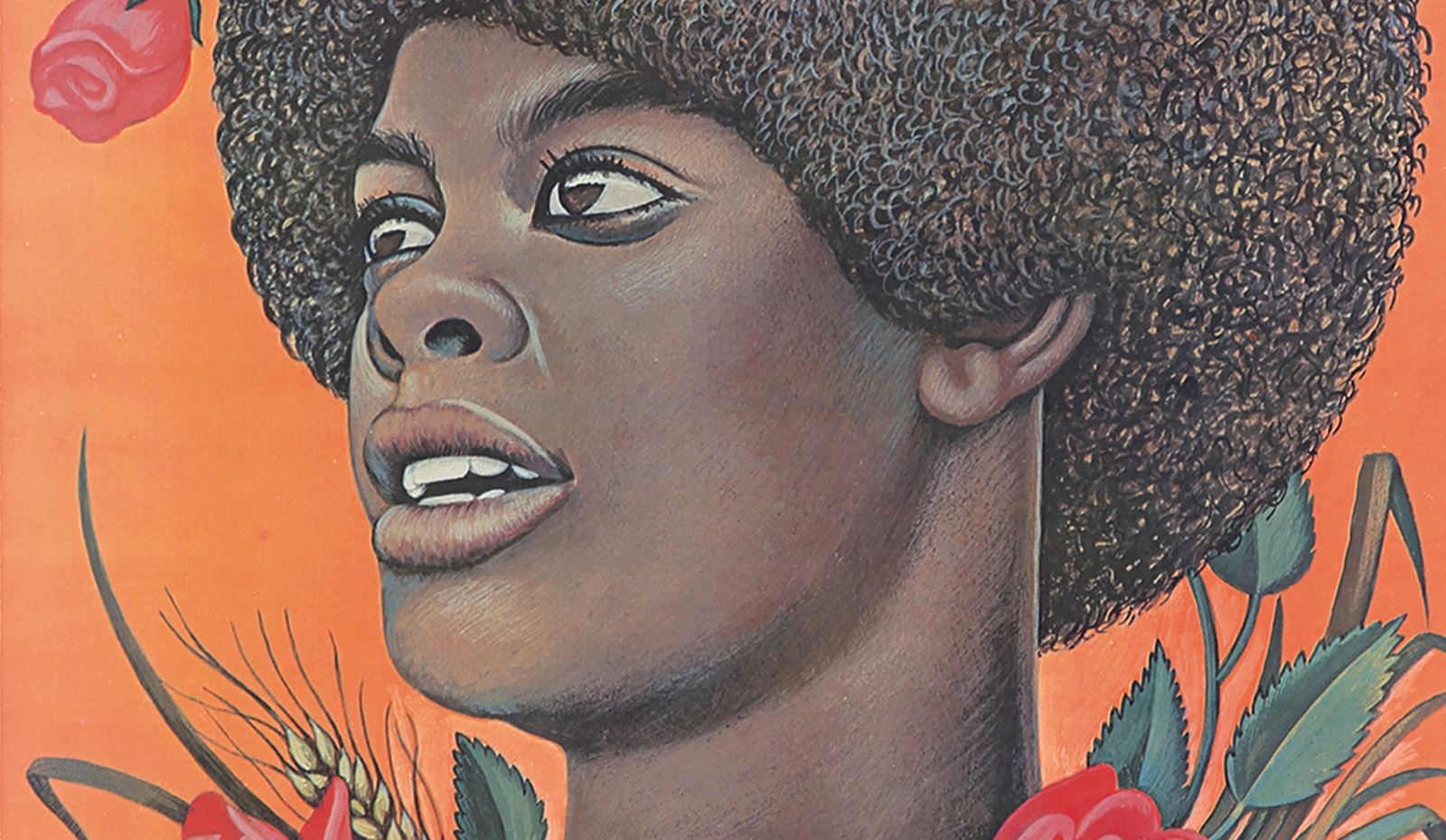 All of these posters are available for purchase via the links provided—but we hope you will enjoy this visual archive regardless.

While best known for his fashion plates, Eula also created a variety of nightlife and concert images. Here, he depicts the legendary Supremes for their sold-out show at Lincoln Center.

In 1912, James Oppenheim commemorated the struggle of striking textile workers in Lawrence, Massachusetts with a poem inspired by a banner carried by young women mill hands. The banner read, “We want bread and roses, too,” affirming the biblical adage, “Man does not live by bread alone.” Set to music by Mimi Farina and recorded by Judy Collins, the poem found new meaning in the ’70s. The theme was adopted by New York’s District 1199 of the National Union of Hospital and Health Care Employees for an unprecedented two-year project celebrating the arts and humanities that remains an annual event. With more than 70% of the district’s membership being Black or Hispanic, and almost 85% women, Davis chose an unidentified beautiful young Black woman as his model. His painting of her, garlanded with wheat stalks and roses, became an icon of the period.

Inspired by African textile motifs, Hampton created this exultant dancer for an appearance of the all-Black Ailey troupe at New York’s City Center. He got his design start in the late 1960s at Caffecino, one of the first off-Broadway theaters for young playwrights, and now works in advertising.

Keiser’s 20-odd posters for an annual Hamburg festival devoted to American folk blues always include a compelling variation of a well-worn acoustic guitar. Here, the instrument seems to be playing itself with the equally well-worn hands of a Black woman. Names of featured acts are superimposed on the guitar image in type like so many familiar scratches.

Celebrating her 50 years in show business, this revue at the Bobino in Paris was met with great enthusiasm and bankrolled by Princess Grace, Prince Rainier, and Jacqueline Kennedy Onassis. Josephine only appeared for three performances, as on the fourth day she was found dead in bed after suffering a cerebral hemorrhage.

Eula was a good friend of Bobby Short, so much so that he designed the invitations for the cabaret star’s 80th birthday party not too long ago. Here, he creates a vivacious and dynamic image of the entertainer’s stint at New York’s popular Living Room.

Printed in 1976, this design was created to promote the legendary cabaret performer Bobby Short at The Bottom Line.

Keiser’s extraordinary posters are the result of creating images from solid forms, like sculpture or collage, which he then photographs. A great music lover, he was fortunate to become associated with impresarios determined to expand Germany’s festivals and concerts beyond old world sounds. He more than met the challenge. Here, his photograph of an open Black hand painted with bright swirls suggests the exciting, seductive rhythms of the Carnival in Rio.

Cutting across northern Manhattan from river to river is Harlem’s main drag: 125th Street. The jazzy night photo is cut into a giant “H” that showcases the area’s bright lights and historic Apollo Theater.

This is the original first printing of this poster by the artistic duo Chermayeff and Geismar. Printed in 1977, it was created to advertise the made-for-tv mini-series of “Minstrel Man,” the story of two black men working in show biz during the early 20th century.

Decades before Jesse Jackson coined the phrase “rainbow coalition” to express the idea of cultural pluralism, Miho visualized this redevelopment program with a series of rainbow-hued squares, each containing the symbol of a black and white handshake of mutual goals, respect, and action.

In this announcement for a concert at Lincoln Center’s Philharmonic Hall, Glaser’s stylized portrait of the revered rock-and-roll singer features his trademark wide smile and his name on the diagonal over his dark shades. Glaser also created a poster for jazz musician Masakela’s solo appearance at Philharmonic Hall around the same time.

Two legends of Jazz music came together to benefit the Lenox Library in New York. The evening of standards was held at the Seiji Ozawa Hall in Massachusetts, which is home to the Boston Symphony Orchestra. Frisina created a smartly minimalist design that pairs Marsalis’ trumpet with a stack of books acting as the instrument’s valves.

Walicki created this celebration of American jazz to promote the Polish Jazz Society. Armstrong flashes his toothy grin under a wash of neon colors while fragments of the American flag surround him.

Blackglama’s name refers to the inky black mink furs they farm, but it was not until the creation of this poster that a Black woman was featured in their advertising. Brooklyn-born Lena Horne was a singer, dancer, actress, and civil rights activist. In this campaign, photographed by Richard Avedon, Horne is finally seated in the hall of legends.

Mood: Shall We Dance?