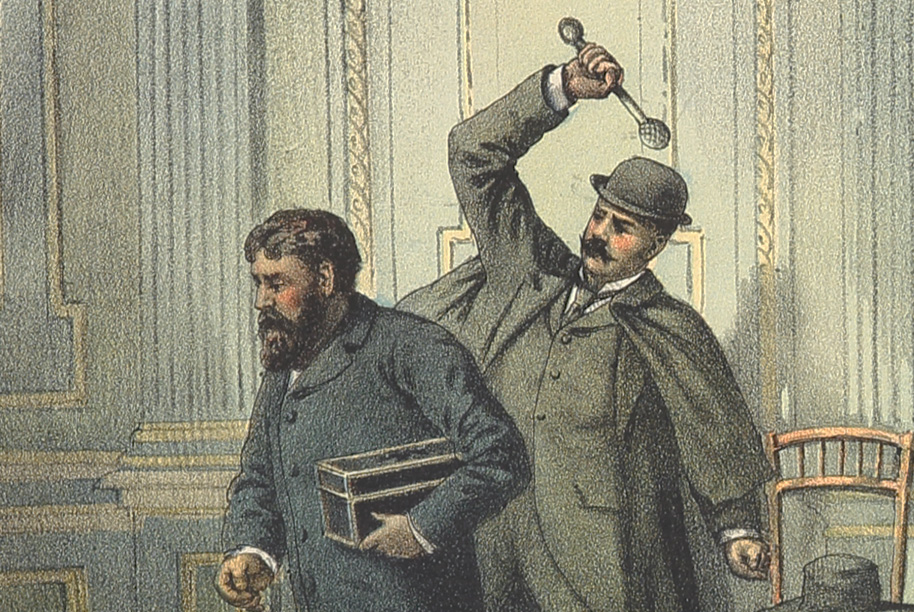 By the 1870s, “Broadway” and “theatre” were becoming synonymous, and the Union Square area near Broadway at 14th Street had become New York City’s main theatre district.

‘The most prominent players, including the stars and their respective managers and agents, could be found parading the sidewalks, their date books in their hands. Those were the days of the barn-stormer, when the “fly by night” manager was in his element. All classes of showmen congregated here, and here the plans of the most important stage providers were matured for many years.’

Theatres came and went with alarming speed in those days. Built mostly of wood and lit primarily by flaming gaslight, the theatres of the late 1800s were infamous firetraps.

As Manhattan’s population continued to spread northward, new theatres appeared near Madison Square, the area surrounding the junction of Broadway and 23rd Street. In 1885, the old Lyceum (at Fourth Avenue near 24th Street) became the first New York theatre to be lit entirely by electricity — with inventor Thomas Edison personally supervising the installation.

Union Square included the central offices for two massive show business empires. B.F. Keith and Edward Albee took over the Union Square Theatre in 1893, extending their vast New England-based vaudeville circuit into the heart of New York. Their booking office controlled most of the major vaudeville houses across the US.

–– From Theater in NYC: History – Part III by John Kenrick

A remarkable time-capsule of a poster. It’s an announcement for a play by William Gillette, a quadruple-threat playwright, actor, director and stage-manager who would go on to create the signature embodiment of Sherlock Holmes (the Meerschaum pipe and deerstalker hat were his inventions).

Gillette’s five-act Civil War drama, “Held By the Enemy,” is regarded as a watershed moment in American theater history, for abandoning crude 19th-century melodrama in favor of realism in sets, costumes, props and sound effects. In fact, for this play Gillette invented a patented machine for simulating the sound of a horse-gallop. (Prior to 1886, Monty Python’s coconut-shell shtick was the industry standard). The drama, of a Union soldier falling in love with a Southern belle in a city he’s just captured, was so affecting it played from 1886-87 and toured Great Britain, fundamentally changing the perceptions there of American theater as a “low” art form. Many posters were created for “Held By the Enemy”; this one, announcing the show at the Academy of Music “November 12” for “one week,” was clearly produced in the first run, before the play’s legendary success was assured.

“Le Pays d’Or,” or “The Country of Gold,” debuted at the Gaîté Theatre in 1892 as a comic opera that reads a bit like a sub-plot of “Deadwood” – albeit with “pleasant and easy” music by Vasseur. Kitty, heiress to a gold mine in California, is locked up in a garret by her evil uncle, until she escapes, and by way of a stolen recommendation letter is hired as a chambermaid by a singer who’s touring in America. The poster collects a number of the set pieces among the three acts, including a tightrope-walker number over Niagara Falls, as well as the comedy of wearing a risqué outfit among the “savages.”

“Would you marry her? Answer me!” The plot of this society drama is far more intricate than the quote might suggest. First performed in 1909 at the Fall River Academy of Music, Massachusetts, the play “deals with the kidnapping of Nellie Blair, her life in the mountains and her betrayal by Richard Thurston. Three years later, she meets Richard Thurston in New York society. He tries to renew their former acquaintance with Nellie, who in the meantime has fallen in love with Victor Lambert, and pushes him away. Richard tells Victor of his relations with his future wife, and causes Victor to break the engagement” (New York Dramatic Mirror, Sept. 4, 1909). The “splendidly acted, handsomely staged play” (The Bayard News, Iowa, March 6, 1913) migrated out to the Midwest while a silent film adaptation premiered in 1911.

A scene from “The World,” a melodrama that closed out the final performance dates of the second Wallack’s Theater, which occupied 844 Broadway at 13th Street in Greenwich Village. And what melodrama!–– A rogue about to cudgel a guest, while another gentleman looks on, defeated, exhausted, appalled, resigned: exceptionally rare, and nothing if not an immortal metaphor. Today, 844 Broadway, the old home of Wallack’s Theater, is the current home of the Regal Union Square 14 Stadium cinema.

In 1895, there were 56,000 bartenders in America. Just 147 of them were women. This fascinating lithographic supplement from the August 3, 1895 Police Gazette (the first widely popular “men’s magazine”) is a gaullimaufry of oddities. In many places it was improper or illegal for a woman to be slinging saloon hooch; in this very year, 1895, the Women’s Temperance League was founded. But 1895 was also the year in which the Berner-Mayer Co. published its legendary Bartender’s Guide. Clearly, this barmaid’s milkshake brings all the boys to the yard.

We should note two other elements in this piece, which is ostensibly an ad for Moët & Chandon Champagne. First, regard the absurd figure on the far left, with the monocle and stiffened collar, who’s sucking on the end of his cane. Second, note the hand-rod, which juts out beyond the end of the bar, visually jabbing the portly figure (on the right) in the rear. He’s reading an ad for a safety razor: “Every man his own barber! An easy and convenient luxury, no danger of cutting one’s face!” Well, the most common place men would read the Police Gazette was in the barbershop, waiting for a shave. (A common joke of the period: “Did you read the Police Gazette?” “No, I shave myself.”) In this one ‘throwaway’ supplement, we can perceive an entire world made weird by societal changes.

Poster Art of the Summer Olympics

The Weird. The Wonderful. The Weirderful.